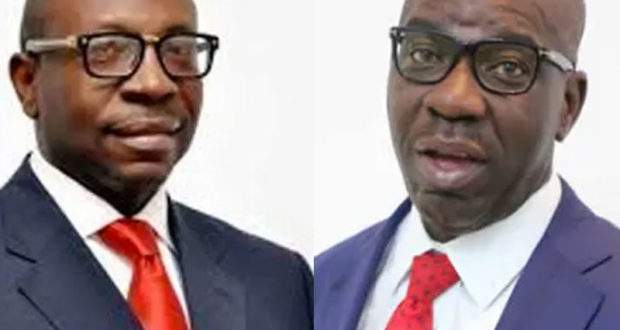 “Edo guber election must not be rigged,”- PDP, Wike warn

The Peoples Democratic Party (PDP), has insisted that. Edo Governorship Election scheduled to hold on Sept. must be free and fair.

PDP National Chairman, Prince Uche Secondus, said this while inaugurating the Edo chapter of the Governorship Campaign Council, in Abuja on Tuesday.

Secondus also cautioned against the use of military and other security operatives that could lead to an abuse of the electoral process.

“By conducting a free and fair election in Edo, the President will not only be stabilising the country politically, but will be averting an impending doom that could make the prediction about Nigeria’s disintegration come true, God forbid.”

Secondus, who expressed confidence that PDP was going to win the Edo poll, added that the heightened tension in the state at the moment was needless if political parties would be willing and equipped to face the electorates.

“But where it is obvious that they have nothing to offer to get the votes of Nigerians, they are resorting to all devious means to undermine the democratic process.”

He recalled that under former President Goodluck Jonathan of the PDP, Adams Oshiohmole, who was the opposition candidate in the Edo governorship poll, defeated the ruling party because the poll was free and fair.

“For us in PDP, the Edo election has been made easy going by the records of achievements of our flag bearers, Gov. Godwin Obaseki and his running mate, Philip Shuaibu.

“What we seek therefore, is a level playing field where the peoples’ votes will count.”

Secondus urged the campaign council to ensure that the electoral desires of the people of Edo State were realised.

According to him, members of the campaign council have been carefully selected knowing their capacity and capabilities.

“I urge you to see your assignment as a challenge to save our democracy, to save our country and to save Edo State from the hand of anti democrats.

“I will not end this address without appreciating the leaders of PDP in Edo State, both former and current, particularly the former governorship aspirants for their sacrifice and understanding.”

In his remarks, Chairman of the Campaign Council, Gov. Nyesom Wike of Rivers, expressed optimism that PDP would win the election.

Wike warned that nobody should attempt to rig the election, saying the people of the state had spoken and it was in clear language.

The governor also flayed Gov. Abdullahi Ganduje of Kano, and Chairman of the All Progressives Congress (APC) Campaign council for Edo State, over his comments that he would isolate Wike and win the state for APC.

While describing the comment as “not ordinary”, he urged party leaders in the state to take the statement as a direct challenge to them to work together and ensure victory for PDP in the state

Previous: Ize-Iyamu, PDP engage in war of words over past comments
Next: PDP Vice Chalrman South East warns NWC on zoning of 2023 presidency to north