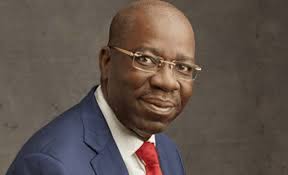 The Federal High Court, Abuja, has adjourned the alleged certificate forgery case of the All Progressives Congress (APC) against Gov. Godwin Obaseki of Edo until Dec. 30.

Punch reports that at the resumed hearing on Tuesday, the APC through its counsel, Mr Akin Olujimi, SAN, attempted to tender some documents in evidence through a subpoenaed witness.

The PDP and Obaseki, however, objected to the tendering of the documents on the grounds that the process did conform with the laws guiding admissibility of documents.
Obseki’s counsel, Mr Ken Mozia, SAN, added that there was no evidence of payment for the documents

The judge, Justice Ahmed Mohammed, however, admitted the document, an INEC form EC9 in evidence, as exhibit PL2.

Justice Mohammed admitted the document on the grounds that it was relevant to the case.
Earlier, the judge held that the fact that the process of tendering the document was not properly complied with, was not enough reason for it to be rejected.

He stated that the way out of the situation was for the witness to be cross examined by the defendants.

According to him, without the form EC9, “the whole case would collapse like a pack of cards.”

On the issue of payment, the judge also noted that the Certified True Copy (CTC) sought to be tendered was brought at the instance of the court as an official body and as such, the court could not be required to pay for the document.

“Objection is overruled” he said, “counsel are free to cross examine the witness”.
The APC then called its third witness, Mr Emmanuel Balogun, an Associate Professor, in the Department of Economics, University of Lagos to give his evidence.

The defence team also objected to the witness giving his evidence on the grounds that the procedure for calling a subpoenaed witness, including service was not followed.

In a short ruling, the the judge allowed the witness to give his evidence, noting that the lapses complained by Obaseki and PDP lawyers were on the part of the court and not the plaintiff.

Justice Mohammed subsequently adjourned the matter until Dec. 30 for the plaintiff s to close their case and for the defence to open theirs.

The APC and one of its chieftains, Mr Williams Edobor dragged Obaseki to court over allegations that he forged a University of Ibadan degree certificate which he used in securing his candidacy for the September governorship election in Edo