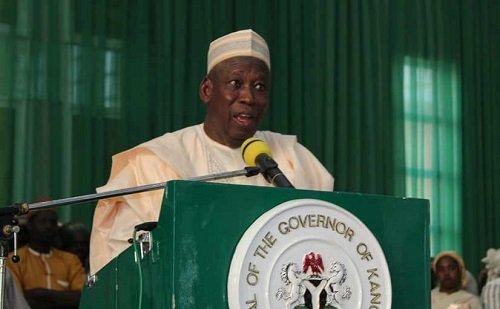 Kano State Governor Abdullahi Ganduje has solicited for votes for the All Progressives Congress (APC), in the Edo governorship election holding on Saturday.

He said the state needs a government that cares about the well-being of its people.

Ganduje, the chairman, APC Campaign Council for Edo poll, said at an APC rally to woo the Arewa community in Benin that a vote for his party in the Edo election was a vote for peace and stability.

“History is being made today; we are here to pledge our support for our Edo governorship candidate, Pastor Osagie Ize-Iyamu and his running mate, Malam Gani Audu.”

He described Ize-Iyamu as a man of peace and a grassroots politician, who had an agenda that would move the state forward.

“He was born and schooled here and therefore understands the challenges of Edo people,” Ganduje said.

He, therefore, urged the Arewa community to vote en masse for the APC in the Edo governorship election so that they could benefit from the dividends of good governance.

Ize-Iyamu assured the people that the APC administration would guarantee peace, progress and development for everyone in the state.

He said: “As you have come out to support me today, so I will support you when I become governor of Edo.

“I will empower your youths and women and provide basic amenities in your locality.”

Alhaji Badamasi Saleh, chairman of Arewa community in the state, said: “We are here to pledge our support for Ize-iyamu and his running mate.

“Ize-Iyamu is our in-coming governor and we will support him. We have endorsed him as our governor