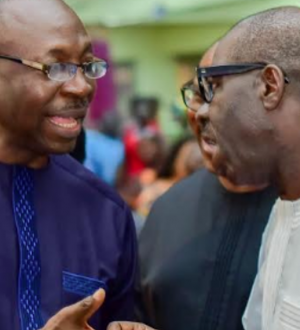 As Edo State governorship election is around the corner, the two major candidates of the poll, Godwin Obaseki and Osagie-Ize-Iyamu have been engaging in campaign of hatred and calumny.

Obaseki on Friday described Ize-Iyamu and former national chairman of the party, Mr Adams Oshiomhole, and their supporters as expired political forces that would meet defeat in the hands of well meaning Edo people at the poll.

Ize-Iyamu accused Obaseki to have allegedly planned to obtain a N20 billion bond loan from financial institutions to pursue his second-term ambition after allegedly draining the state treasury.

The Special Adviser to Obaseki on Media and Communication Strategy, Mr Crusoe Osagie, however said: “Governor Obaseki has unwavering faith in his works and the growing support of millions of Edo people, who are the actual voters that will re-elect Obaseki for another term in office.”

He said “the avalanche of lies being bandied by Ize-Iyamu and his cronies who have run out of ideas in their desperate effort to sell a very bad product for the Edo gubernatorial election will not save them from their imminent defeat.

“When you have a candidate that is facing criminal charges for laundering N700 million at the same time he is trying to campaign for an election, then you can imagine that they are left with no other choice than to tell cheap lies just to get ahead.

“Ize-Iyamu knows beyond doubt that his political career will be terminated unceremoniously on September 19 by Governor Obaseki and no desperate lie can save him now.”

According to Osagie “Edo people have come to the full understanding of Obaseki’s brand of politics which is about the greatest good possible, for the greater number of people as against Ize-Iyamu’s retrogressive politics of converting public wealth to his personal property.

“A case in point is the trial he is currently facing in court. Edo people know Ize-Iyamu and his ways. They know they do not stand any chance in the coming election, hence, their resort to lies and campaigns of calumny.

“Edo State under Obaseki has since shaken off the last vestiges of bad governance which Ize-Iyamu is notorious for, and our people are determined, more than ever, to sustain the progress we have so far witnessed, with their votes.

“With Obaseki, trust, accountability to the people, integrity, our common dignity are the driving forces.

“These qualities have been demonstrated over and over again in the last three years and seven months, and a renewed four-year mandate from Edo people will turbo-charge us to deliver more dividends of democracy.

“Followers of the campaigns in Edo State, have in the past few days expressed their readiness to file behind Obaseki come September 19, on the back of our score card, that has moving stories of how Obaseki has reformed pension management in Edo State.

“From an era of pain, sorrow and death of pensioners in endless queues and during protests, to an era in which the people’s governor cleared all pension arrears that have accumulated since 1996.

“Our achievements in the education sector have been referenced by national and sub-national governments, who have come to Benin to learn how we transformed public education in our state.

“In sports, civil service reforms and the provision of infrastructure, and other sectors, our achievements are there for everyone to see.

“Edo State is now rated as the best place to live and do business since we rid our streets of political thugs who constituted nuisance to decent living and businesses. Expectedly, some of these thugs are today’s Ize-Iyamu’s cheer leaders.

“Edo is the only state today, where you can buy a plot of land, get your Certificate of Occupancy (C-of-O)in less than two months and build your house without any area boy coming to harass or intimidate you.

“These achievements and more, underpin Edo people’s faith in Obaseki and we are ready to keep things this way for another four years,” he said.

On his part, Ize-Iyamu through his Director of Communication and Media Campaign Organisation, Mr John Mayaki, accused Obaseki of draining the state’s treasury to procure his party ticket.

Mayaki in a signed statement condemned what he termed as “the Governor’s short-sighted and irresponsible indebting of the state for desperate and personally-beneficial political activities”, and warned financial institutions against granting fraudulent loans to the Edo Government.

He said: “After draining the state treasury with his corrupt 15 billion naira payout to the PDP tax-collectors for the party’s ticket, it has come to our notice that Governor Obaseki is now scurrying around to embark on another borrowing spree with a planned 20 billion naira bond loan from some financial institutions.

“We find it shocking that after the many tribulations Obaseki’s directionless and incompetent administration has caused in Edo State, the Governor is hatching fresh plans to mortgage the future of the state and her youths with additional loans to fund his desperate political agenda to foist himself on the people for another four years.

“Obaseki already racked up foreign loans that propelled Edo State to number two on the states with the most indebtedness in the country without any commensurate gain in infrastructure, the economy, and security.

“Efforts to get the Governor to offer accountability on what he did with the loans and the role his private firm, AfrinInvest, played in their acquisition all fell on deaf ears.

“It is therefore heartless, irresponsible, and unconscionable for such a man to even conceive obtaining another loan in the tune of 20 billion naira for his political godfathers in the PDP who are cashing in on his desperation and lack of integrity.

“We want to warn all financial institutions to honor the age-long freeze practice observed during election seasons and possible change of government and not grant any loan to the heartless Godwin Obaseki who appears to now be on a mission to completely sell-out our state and the future of our youths.

“We are also alerting the EFCC, ICPC, CBN, and other financial regulatory bodies to pay close attention to what is going on in Edo State.

“It is a known fact that Obaseki has never maintained any close tie with Edo State. He is a Lagos businessman who for long held his own people and state in contempt.

“Perhaps now that it is obvious that he will be sacked from office in September, his plan is to smash and grab before disappearing back to where he came from.

“For those of us who have no other place to call home apart from Edo State, these criminal plans and heist against the people will be fiercely resisted as we will not fold our hands and let a desperate stranger destroy polity

Previous: Lagos East Senatorial seat: Group urges Tinubu to consider Razaq as replacement for Oshinowo
Next: Oshiomhole: What Next for Dethroned APC Chairman?