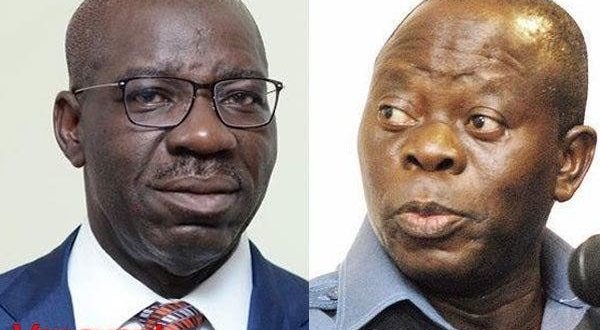 The Special Adviser on Political Matters to Edo State Governor, Godwin Obaseki, Chief Osaro Idah, has declared that members of the All Progressives Congress (APC) in the state will not allow direct governorship primary election.

He said that they would not allow Comrade Adams Oshiomhole-led National Working Committee (NWC) of the party to dictate for the state APC.

He stated that forcing direct primary election on Edo APC members would be against the decision of the National Executive Committee (NEC) of the party and the last meeting in 2018, which had not been reviewed and that it would not be proper to have crowds at this crucial period of Coronavirus Disease (COVID-19).

The state chapter of the APC on Friday raised the alarm and wrote to the Independent National Electoral Commission (INEC) on the plan by Governor Godwin Obaseki to scuttle the party’s primary election with inflated cases of COVID-19 pandemic.

The party, through its Secretary, Lawrence Okah, in the letter addressed to INEC’s Chairman, Prof. Mahmood Yakubu, stated that Obaseki, who is seeking re-election, had instructed the testing of fictitious 300,000 persons, with the ultimate desire to announce fake positive results to serve as a foundation for the scuttling of the party’s primary election and to declare total lockdown during the period.

But Idah, in an interactive session with reporters, insisted that indirect primary election must be used to pick the governorship candidate of APC on June 22, for the crucial poll on September 19 this year.

“It is not possible for the members of NWC of APC to make such declaration (on direct primary election in Edo State), because it is not within their rights.

The Constitution of APC is very clear on who has the right to do so. The party at the state level has the right to determine the mode of primary election it prefers, which is subject to the last meeting (in 2018) of the NEC of APC in Abuja, where the instruction was approved. Since then, nothing has been said by NEC of the party. So, nothing has changed.

“The NWC of APC met and recommended to NEC for approval in 2018. Since then, NEC has not met to change the decision. Members of NWC cannot on their own make an order that is compelling. To take such a crucial decision, members of NEC must meet.

To change the party’s national chairman and other vital decisions, there must be a convention, which is the highest authority. Last year, when the election in Kogi State took place, it was Kogi APC that took the decision on indirect primary election.

So, what has changed? Edo State Executive Committee (SEC) of APC has done the right thing, by opting for indirect governorship primary election.

Governor Obaseki is not scared of direct primary election, because he will win fair and square, but we want the right process to be followed and the right thing to be done. We do not want to expand anybody’s ego. We want the extant law to be obeyed.”

Edo Commissioner for Information and Orientation, Paul Ohonbamu, while also speaking, described the allegations leveled against Obaseki by the APC in the state as unfounded, senseless, spurious, mischievous and vexatious.

“So surprised that the suspended factional Secretary of APC in Edo State, Lawrence Okah, could go to that extent. It is really unfortunate. Okah is creating tension where there is none. Governor Obaseki has no cause to shy away from the June 22 governorship primary election of APC and the September 19 main poll,” he said.