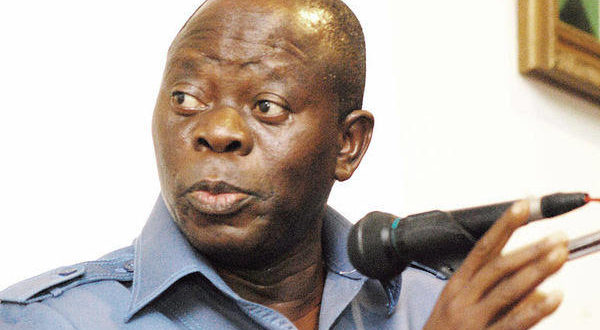 Edo: Why I am not a godfather to gov Obaseki, Oshiomhole explains

Adams Oshiomhole, national chairman of the All Progressives Congress (APC), has disclosed that it gives him embarrassmen when people say he seeks to be the godfather of politics in Edo state.

He said it is not true that he is seeking to be Godwin Obaseki’s godfather.

Obaseki, governor of the state, and Oshiomhole are at loggerheads over political differences which have spawned a crisis in the state chapter of the APC.

A faction of the APC in the state had said the national chairman lacks the moral authority to lead the party and asked him to resign, The Cable reports.

Speaking in an interview recently, Oshiomhole said he has helped Obaseki to reconcile with several persons in his effort to keep the peace in the state.

“I think as a brother and to be honest, I regard the governor as my brother and a very close friend, what I owe him is to assist where he wants me to. To help him make peace with anyone whom he has issues with,” he said.

“When the governor entered the room, Idahosa sat and said he was not going to have a handshake with him and used a language for me that was derogatory. I said ‘No, Charles. You cannot talk like that. This is the governor and you must respect him.’ And I said, ‘Governor, please whatever Charles has done that you are not happy about, we have won, put them behind you.’ I said in this business, if you didn’t work with people because of their electoral value, sometimes you would work with them because of their nuisance value. So you would not gain by saying you wouldn’t work with this one or this one.

“My own embarrassment is when they say Oshiomhole wants to be like a godfather. If I wanted to be, I will be nominating commissioners. I only persuaded him to accept one commissioner from me, only one and I gave my reasons. He was a founding member of my campaign organisation in 2006, Mika. Other than Mika, I did not nominate any commissioner; I did not nominate any special adviser, special assistant because for me these are governance issues. So where is the godfather from?”

Oshiomhole was suspended by a faction of the APC in Edo, while his loyalists in retaliation, suspended Obaseki, alleging that he wanted to defect from the party to the PDP.

Previous: APC Crisis: Chieftain tasks members on party supremacy
Next: ‘Jubril from Sudan’ may be the secret Danjuma is referring to, says Fani Kayode