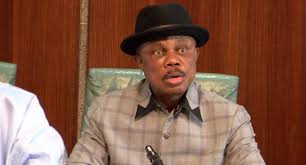 The Economic and Financial Crimes Commission (EFCC) has arrested the immediate past governor of Anambra State, Willie Obiano.

An official of the commission told Daily Trust that the former governor was on his way to United States of America.

The official disclosed that the former governor who has been on the Commission’s watchlist was arrested at the Murtala Muhammad International Airport Lagos at about 8.30pm as he prepared to board a flight to Houston, USA.

When contacted, the spokesman of the EFCC, Wilson Uwujaren, confirmed Obiano’s arrest but declined further comments.

Last year, EFCC had announced that it had placed Obiano under watch.

In a letter to the Nigeria Immigration Service, the anti-graft agency had demanded that Obiano’s movement should be monitored.

In the letter addressed to the Comptroller General of Immigration, the EFCC requested to be informed anytime Obiano was travelling out of the country from any of the international airports, as well as other points of entry and exit.