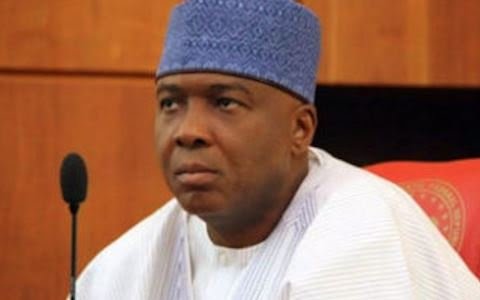 EFCC claims in forfeiture application case — Our stand, by Saraki

Yesterday, the lawyers representing Dr. Abubakar Bukola Saraki, former Senate President, appeared before Justice Rilwan Aikawa of the Federal High Court, Lagos, to oppose the application by the Economic and Financial Crimes Commission (EFCC) for the forfeiture of his Ilorin home funded partly with funds provided by Kwara State Government in fulfillment of the Governor and Deputy Governor (Payment of Pension) Law 2010 of Kwara State.

Led by Mr. Kehinde Ogunwumiju (SAN), Dr. Saraki’s lawyers argued that all the exaggerated claims by the EFCC on withdrawal of government money and its use to acquire property were the same claims made before the Code of Conduct Tribunal, Court of Appeal and the Supreme Court between September 22, 2015 and July 6, 2018, when all the courts concluded and gave judgment respectively to the effect that there was no prima facie case established against Saraki.

It should be noted specifically that Count 7 of the decided case, which went up to Supreme Court states as follows: “That you, Dr. Olubukola Abubakar Saraki….(made) various lodgements into your Guaranty Trust Bank account at GT Bank GRA, Ilorin, through your aides as the Governor of Kwara State and your account officer and which funds you handed over to them in cash at the Kwara State Government House…which were not fairly attributable to your income, gifts or loans…” The same old story is being repeated by the EFCC before Justice Aikawa at the FHC, Lagos.

The lawyers also submitted before Justice Aikawa that EFCC produced no new evidence different from what was presented before the CCT and the appellate courts in 2015 and this amounted to re-opening a case that had been decided up to the Supreme Court. This is just a case of bringing back through the back door a case they had earlier lost.

The court was also told that the claim of transfer of funds belonging to Kwara State Government has no evidential link to Saraki as there was no document or instruction or testimony by any witness linking him to any such illegal transfer of money. We will like, for emphasis, to state that the fictitious claims by EFCC of a certain amount being taken from government coffers and deposited by aides have no basis, is totally untrue and a fabricated lie. The agency has not produced any oral or documentary evidence of approval, instruction or endorsement by Dr. Saraki as proof of such act.

These claims made newspaper headlines when they were first thrown into the public space by the same EFCC in September 2015 during the CCT trial and no evidence has been produced in support of such claim. They remain mere headline-grabbing stunt.

The position of Dr. Saraki’s lawyer is that while EFCC could rely on mere suspicion in obtaining an interim forfeiture order, it should provide concrete evidence and prove beyond reasonable doubt its claims in order to obtain a permanent and final forfeiture order.

The lawyers also told the court that in line with the provision of the Governor and Deputy Governor (Payment of Pension) Law 2010 of Kwara State, the State Government provided N252.2 million for the building of a five bedroom Duplex for Saraki as a two-term Governor of the State and he added his personal money to enable him fund the construction of the property in question. The personal fund came from earnings from companies in which Dr. Saraki has statutorily declared that he has substantial and controlling interests. Also, the financial contribution Dr. Saraki made to the construction of the house in question was made in installments over several years after he left office as Governor.

Moreover, the court was told, the property was built on a private land, never owned by government. The matter has been adjourned till April 27, 2020 for judgement.
We observed that the reports in the newspaper were selectively derived from the written briefs submitted by both parties in the matter and the journalists decided to give prominence to the sensational claims of the EFCC while using the brilliant submissions of the Saraki lawyers as foot notes.

We, hereby, assure the associates and supporters of Dr. Saraki that he remains unflinching in his belief in the ability of the Nigerian judiciary to always do justice to all persons and at all times. We believe that justice shall prevail in this case, as well.