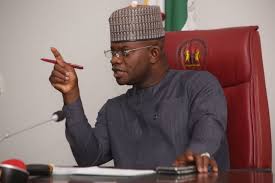 The Kogi State Government, is at loggerhead with the Economic and Financial Crimes Commission over a purported order freezing its account with a new generation bank.

The state government accused the EFCC of planning to tarnish the image of the state governor, Yahaya Bello, and members of his team.

The state government said that it is embarrassed by the action of the anti-graft agency, saying that would seek redress in the court.

In a press conference, the state Commissioner for Information, Kingsley Fanwo,, insisted that the claims made by the anti-graft agency were false.

He said that the government may jettison its decision to sue the EFCC if the anti-graft agency tenders a public apology.

Speaking on the issue, Fanwo said, “While we cannot estimate the extent of the damage caused by this unwarranted attack by the EFCC on the image of the state, and the reputation of the governor (Yahaya Bello) and his entire team, including members of the financial team, whose names have been mentioned and preserved forever on the Internet in relation to this disgraceful episode, we believe that apart from other legal actions, which will be taken against the EFCC, that this press conference is necessary to set the records straight.

“Consequently, we urge Nigerians to know that the various news surrounding the alleged conversion of salary bailout funds in Kogi State are fake; the allegations and acts are those of malicious men and women employing the machinery of government to do the bidding of their seen and unseen allies.

“The Kogi State Government will seek appropriate redress and will resist most vehemently the instant attempt and any further attempt to bring her into disrepute.

“The allegation that the Kogi State Government authorised the opening of a fixed deposit account wherein it deposited the said bailout loan of N20bn for the purpose of generating interest for itself is false. The Kogi State Government gave no mandate or instruction to Sterling Bank Plc to open a fixed deposit account on its behalf as it could barely meet the salary obligations for which the funds were received at the material time.

“Sterling Bank Plc by its letter of September 1, 2021, confirmed in writing that the ‘the Kogi State Government does not currently operate or maintain a fixed deposit account with Sterling Bank.’

“The letter proceeded to confirm that the balance in all the accounts operated by the Kogi State Government was approximately N46m. Finally, the letter confirmed that account number 0073572696 cited in the alleged order of the court is ‘an internal (mirror) account operated by the bank for the purposes of managing the Kogi State bailout facility.’”

Previous: Ekiti Guber: PDP group threatens to boycott election
Next: I went on vacation, I didn’t run away for Buhari- Charly