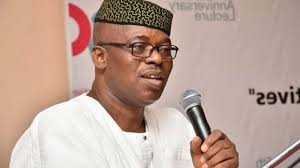 The Election Petition Tribunal hearing the dispute arising from the June 18 governorship election in Ekiti State has adjourned hearing following the non-availability of another witness listed to give evidence at its sitting on Wednesday.

The INEC application referred to by Adewale was a motion on notice to set aside the subpoena issued by the Tribunal on the witnesses from INEC earlier moved by its counsel, Mr Chris Onwugbonu.

Adewale was miffed that the 4th Respondent (INEC) waited till late Tuesday evening to file an application that the witnesses would not appear in court on Wednesday.

Lawyers to all Respondents in the petition opposed Adewale at the continuation of proceedings after the Tribunal resumed at 2.38pm after a two-hour break.

Counsel to the 1st and 5th Respondents, Mr. Biodun Oyebanji and Mrs. Monisade Afuye, Prince Lateef Fagbemi (SAN) countered Adewale maintaining that the counsel to the Petitioners ought to have gone ahead with other witnesses.

Fagbemi said the whole essence of knowing the list and sequence of witnesses is for the Tribunal to prepare for them, adding that everything done before the three-member jury must be in the interest of fair hearing and justice.

Counsel to 2nd Respondents, the All Progressives Congress (APC), Chief Akin Olujinmi (SAN), aligned with the submission of Fagbemi saying since the Petitioners have chosen to proceed in the trial, they should be diligent in making available their witnesses.

Olujinmi emphasized that the Pre-Hearing Report stipulated giving fair hearing to parties and the processes must be fast-tracked in view of limited time to hear election petition cases.

Counsel to the 3rd Respondents, Mai Mala Buni, Mr. Umar Abdulhameed, kicked against what he called the attempt by the Petitioners to vary the provisions of the Pre-Trial Report insisting that they (Petitioners) must come by way of application.

Abdulhameed said all parties in the petition are bound by the provisions of the Pre-trial Report, maintaining that the reason given by the Petitioners was not cogent enough.

But the Tribunal in a short ruling read by Justice Kpochi said it partly allowed Adewale’s application and ordered that the hearing of today’s witnesses be stood down till a later date pending the outcome of the said motion.

The panel held that the order was given in view of the window provided in the Pre-Hearing Report that “where a good reason is advanced, a sequential hearing order of witnesses should be re-ordered,” saying proceedings shall continue on Thursday, 6th of October.