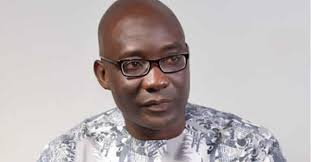 Ekiti Decides: Ex-Deputy Governor says he will wait till all votes are counted

Ex-Deputy Ekiti Governor Prof Olusola Eleka, has said that his people would wait till the votes are counted.

After voting at his Unit 7, Ward 2 Okeruku, Ikere Ekiti, he said that the the ongoing governorship poll is fair, transparent and orderly.

He lauded he electorate for conducting themselves in an orderly manner.

Resounding to question on  whether the People Democratic Party (PDP) would win the election, the Ex-Deputy Governor said he has voted for his party but the outcome would be the wish of the people.

He said: “I have done my part, I’ve voted for my party, whatever the outcome is the wish of the people.

“I think there was a place where they complained of rubber stamp and the people insisted that stamp must be provided before they will continue with the process.

“The process itself is quite fair and I think it will make the process count. Usually, you will expect the people to wait behind to defend their votes. Even if you don’t tell them to wait, they will want to wait so that the votes are counted correctly.”

In a related development,  Governor of Ekiti, Kayode Fayemi  while casting his vote at  Ward 2, Ogilolo Unit 9, Isa-Ekiti this morning.

Fayemi  commended the Independent National Electoral Commission(INEC) for the early commencement of the election.

He said: “INEC should be given a pass mark. My Permanent Voter Card was still recognised and it is the PVC that I have been using since the beginning of this process.

“The process is seamless. Accreditation is now done alongside voting.”