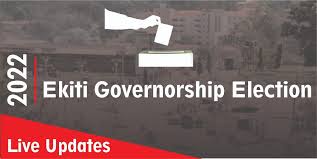 The ongoing governorship election in Ekiti State has attracted a massive turnout of voters in many parts of Ado-Ekiti as hundreds of voters had rushed  to the polling units as early as 6:45 am.

It was learnt that at ward 8, unit 4 and 5, Odo Aremu area of Ado metropolis, over  100 voters are waiting for officials the the Independent National Electoral Commission(INEC) from around 7.05 am.

Politico.ng also observed that a van belonging to security operatives  was stationed at the Ereguru junction and Oke-Ori Omi along the Old Governor’s Office.

The situation at  St. Thomas Primary School Irona, shows that teeming voters were seen checking their names on the lists with INEC staff already at their duty post.

At  St. Paul primary school, Odo Ado, Ado-Ekiti, electorate were seen in their numbers as early as 7:25am checking the voters’ register pasted on the wall.

It was gathered that as early as 7:05am, in large numbers, people had thronged to polling unit where the Special Adviser to President Muhammadu Buhari, Senator Femi Ojudu, will vote

An elderly woman, Alhaja Suliyat Oguntuase, at Ereguru to newsmen that: “I am here early to get accredited don’t have the and exercise my franchise because I don’t have energy to fight or stay long in the queue”.