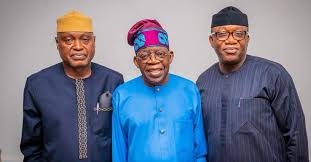 Asiwaju Tinubu has congratulated the Ekiti governor-elect and the party for winning the weekend election.

According to him, Oyebanji needs to be lauded for the steadfastness and passion he brought into the campaign, which he said paid off with the emphatic and outstanding victory.

He called on party leaders to continue to work for greater victory in 2023 general elections.

He said: “I congratulate our Governor-elect Abiodun Oyebanji and his Deputy, Mrs. Monisade Afuye, for their great success at the election.

This victory is our victory as members of the All Progressives Congress.

I salute the people of Ekiti State for voting for progressive leadership and continuity. I commend the leadership of our party for leading APC to this major victory in Ekiti. Also deserving of praise are our party’s governors led by their Chairman and Governor of Kebbi for their hard work and tenacity to achieve victory for the party.

This feat should motivate and inspire us as we go for more victories in the coming elections.

“I must commend the now outgoing-Governor, Dr. Kayode Fayemi, and his team whose progressive leadership in Ekiti made it possible for APC to retain government for the next four years. I am confident that the Governor will finish well and strong.

“While thanking the people of Ekiti once again for standing by APC, I urge them and indeed the generality of Nigerians to continue to maintain their faith and confidence in our party.”

He said: “Following the announcement of your victory in the June 18 Ekiti Governorship Election by the Independent National Electoral Commission (INEC), I hereby write to congratulate you accordingly,” the letter reads.

“I believe that power belongs to God and He bestows upon whoever he chooses. I also believe in popular choice that the unfettered expression of the peoples mandate as one of the crucial hallmarks of democratic principle and practice.”

He asked the governor-elect to ensure the welfare and security of the people of the state, as those were his motivation while vying for the position.

“Democracy must therefore deliver to the people dividends of security or protection and enhance their social welfare and well-being basically, and among other deliverables,” he said.

“These were the motivation for my own ambition in the governorship of Ekiti State which I feel strongly to reiterate here in view of the precarious situations of our people at the moment.

“Please take urgent actions aimed at redressing the plights of our people when you fully assume the mantle shortly.

“Finally, I wish you the guidance of the Almighty God in the onerous task ahead. Congratulations to your spouse and running mate.”

Previous: Ekiti Poll: “I believe that power belongs to God,”- PDP candidate
Next: I am still having merger discussion with NNPP- Obi