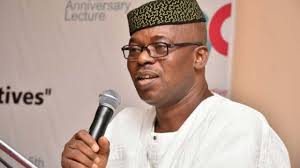 The chairman of the Social Democratic Party in Ekiti State, Dele Ekunola, has said  that the gubernatorial candidate of the party in the just-concluded election, Segun Oni, will reclaim his “stolen” mandate in the court.

He made this statement  while addressing newsmen at the party secretariat, in Ado Ekiti, the Ekiti State capital, assuring that the party has concluded that it would go to court to reclaim its mandate as expressed by the people of Ekiti State over the weekend.

“I can assure you that we have concluded our plans to take the injustice meted on Ekiti people to the tribunal based on the weighty evidence before us. We are in the vantage position to reclaim our mandate because it was full of irregularities; ranging from vote buying and selling, intimidation, harassment of voters and destruction of electoral materials openly in the presence of the security officials.”

“What kind of situation did we find ourselves in this part of the world?A non-performing sitting government buying votes with the money that belongs to everyone of us from the electorate, capitalizing on their situation due to the harsh and impoverish policies and programs of the government. Where did we get it wrong for God’s sake? Ekunola queried.

Previous: APC Chairman, Adamu speaks on Tinubu’s running mate
Next: You should wait till 2027 or 2031- Babangida tells Peter Obi