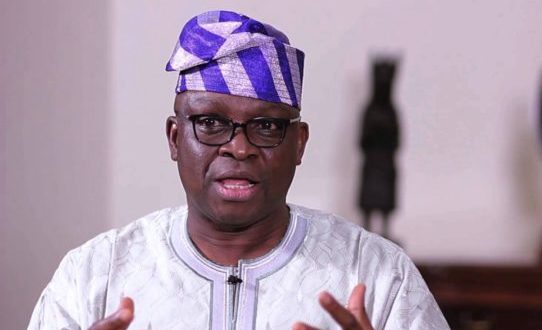 The crisis rocking the Ekiti State chapter of the People’s Democratic Party(PDP) took a another dimension on Tuesday when some of its leaders in Ekiti South West Council area rejected the chairmanship candidate of ex-governor Ayodele Fayose for the party’s forthcoming congress.

The PDP stakeholders said it was too early to endorse any candidate at a time when contenders were still emerging, saying that the action of the governor remained unpopular and undemocratic.

They promised to resist the imposition , which they said was unacceptable, saying they would rely on the party leader, Senator Biodun Olujimi, for the candidates that they would support.

A communiqué after a meeting of the stakeholders in Ilawe Ekiti stated, “We shall stand by and support any state chairmanship candidate who enjoys the support of collegiate leadership of the party rather than that of a one-man endorsed aspirant”.

They urged that “the wards and local government congresses must be conducted in open and transparent manner without compromise”.

The stakeholders stated: “Senator Olujimi is, and remains the leader of PDP in Ekiti State and we resolutely commit our loyalty and allegiance to her and the PDP.

“We pass a vote of confidence and support the State Working Committee of the party led by Chief Gboyega Oguntuwase in her efforts at repositioning the party, instilling discipline and entrenching constitutionalism into the party hereby building people’s confidence in our party.

READ ALSO: Ekiti PDP sacks Fayose’s loyalist
The PDP stakeholder also resolved that “everybody should go back to his/her ward to continue an aggressive mobilization for the party” and as well “welcome back all our genuinely repentant party members who defected or stepped aside as a result of past misdemeanor, imposition and party mismanagement by former Governor Ayo Fayose”.

Olugbade, who said that the stakeholders after a critical review of the recent situation in Ekiti PDP, said, “Unequivocally, we have chosen, we have taken, we have adopted Senator Biodun Olujimi as the real leader of PDP in Ekiti State.

“We are resolute about this and we are committed to be loyal to her, we are committed to follow her footsteps, to take orders from her, to follow her as a good leader. We are very satisfied and we pass a vote of confidence on the leadership of Gboyega Oguntuwase who is the chairman, Ekiti state chapter of PDP and the leader of the SWC in Ekiti State,” the PDP stakeholder said.

Atofarati added: “The endorsement by Fayose did not represent the mind of the majority and that it is an aberration because the SWC has not released the zoning arrangement. So, why will Fayose preempt the position of the zoning arrangement. The people have said they are waiting for Senator Olujimi and other leaders to inform them of who to follow”.

Previous: Obaseki to Oshiomhole: My three years’ performance surpasses your eight years’ achievements
Next: You are a strong pillar that is needed in PDP, Makinde tells Oyinlola