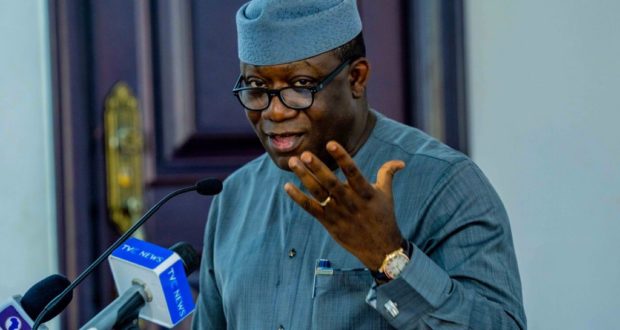 Ekiti Politics: Ojudu, Adeyeye shun Stakeholders’ meeting
The political fracas rocking Ekiti State chapter of the All Progressive Congress at the weekend seems to be far from being settled.

Some aggrieved chieftains of the party shunned
its stakeholders’ meeting where issues affecting the party were discussed.

The meeting which was convened at the behest of the the Paul Omotosho-led State Working Committee held at the Osuntokun Hall, Government House, Ado-Ekiti.

Others were Minister of Trade and Investment, Otunba Niyi Adebayo who was ably represented, Speaker of the Ekiti House of Assembly, Funminiyi Afuye, state assembly members, cabinet members, elected party chairmen, party elders forum and 10 representatives from each local government.

Impeccable source within the party confided in our correspodent said that notice of the meeting was sent to all statutory members including Ojudu, Adeyeye, Oluyede and other aggrieved chieftains except those on suspension but no reason was given for their absence.

A statement jointly signed by the 15 APC chieftains alleged that Fayemi has been dictatorial, sectional and brutish in the running of the party, thereby turning party organs into instruments of suspension and victimisation.

But speaking at an APC stakeholders’ meeting held on Saturday, July 4, 2020, in Ado Ekiti, Governor Fayemi said the disagreement between him and the Ojudu-led aggrieved leaders was a family affairs.

The Governor assured that he won’t treat any party members as enemy despite the vitriolic attacks being launched against him by the aggrieved leaders.

“Whatever disagreement we have in Ekiti APC is a family affair. I’m not an enemy to anyone and neither is anyone an enemy to me”, he said.

In a communique issue at the end of the meeting and signed by the state APC Publicity Secretary, Ade Ajayi, the stakeholders passed confidence vote passed on Governor Fayemi after holistic review of the many projects carried out by his administration, which include road and water projects, schools’ renovation and sinking of boreholes across schools.

Others, according to the include: airport project, investment in agriculture, health, social investment, attraction of investments, both foreign and national, , making Ekiti proud as the Chairman of Nigeria Governors Forum as well as his quality leadership role at the national level.

Ajayi said, “A vote of confidence was also passed on the party executives from the state to ward level for winning all elections conducted so far, including the presidential, national and state assemblies, as well as local government elections.

“The National and state Assembly members equally expressed their support for the Governor and the party executives from state to the ward level”.

He added that part of the resolutions was the directive given to party members to withdraw all cases instituted against the party in line with President Buhari’s directive.

“Stakeholders resolved that all matters in court against the party at all levels should be withdrawn with immediate effect.

“That the code of conduct for all political appointees and elected officials should be strictly adhered to.

“That forthwith, no negative story should be sponsored against the party in the media. Such action by any member shall be viewed as anti-party”.

Ajayi stated that the stakeholders also agreed that an adhoc committee should be composed to address all the members’ grievances and make recommendations on how to resolve them to the party.