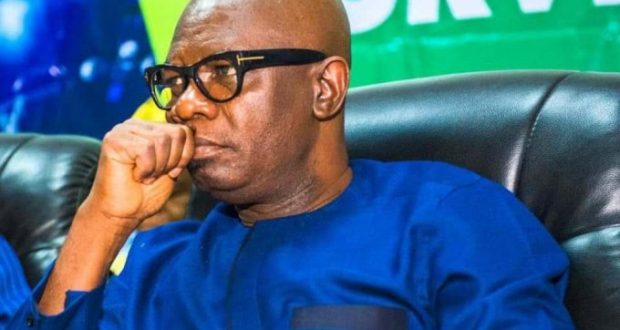 Speculatios are rife that Ondo Deputy Governor, Agboola Ajayi, might be pressured to resign this week.

Ajayi, who was candidate of the Zenith Labour Party (ZLP), lost his bid to govern the state after he came a distant third in the October 10 governorship election.

He resigned from the ruling All Progressives Congress(APC) in June, joined the Peoples Democratic Party (PDP) but failed to clinch the party’s ticket before moving to the ZLP.

The pressure on Ajayi to resign, according to some of his allies in the Assembly and ZLP, is to prevent what they termed unnecessary impeachment brouhaha.

Some of the sources said Ajayi might turn in his resignation to the Speaker before end of this week.

It was gathered top notch friends of Ajayi, including a northern Governor has reached out to advise him accordingly to resign.

A top Ondo government officials confirmed to The Nation that aggressive steps would be taken to ensure Ajayi is impeached if he fails to tender his resignation.

The official said Ajayi allies in the Assembly were already caving in to sign the impeachment notice.

According to an ally of Ajayi: “From all we have seen, the game has ended and there is no way anyone can continue the fight; we have reached the end of the road as far as this governorship issue is concerned.

“We have had a review of the circumstances of our performance and honestly, our conclusion was that we undermined Akeredolu and overrated our candidate’s capacity to raise funds and mobilise resources for the battle.

“The most worrisome was not just the result from the South, but his own local government where he was roundly embarrassed.

“Prior to the election, we were assured by our candidate and even our national leader- Mimiko was confident based on the assurances from Agboola Ajayi that there were more than enough resources for the battle.

“But we became very uncomfortable when on Wednesday our candidate began to develop clay foot upon enquiries from Mimiko to raise some funds for the immediate day preceding the election.

“From all indications, Mimiko is unhappy because he was deceived into the project to fight his longtime friend and you know the implications of such a risk.

“Those of us who are close to deputy have advised him to honourably resign before he is disgraced because we foresee a forceful removal and you guys know how brutal Akeredolu can be when he fights. The man may no longer enjoy any public sympathy.

“We reached out to some of the deputy Governor’s friends, including one of his northern Governor friend and persons of goodwill have advised him accordingly that he should resign.

“We wanted to play a card and prove point with his presence as a sitting deputy governor running against the Governor and defeating him but all that is of no effect any longer so there is no point heating up the polity.”

Previous: We will welcome gov Umahi warmly if he defects- APC
Next: APC group warns #EndSARS protesters not to constitute nuisance