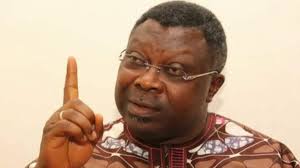 A faction of the All Progressive Congress in Osun State has kicked against the emergency of  Otunba Iyiola Omisore as the National Secretary of the party.

The  Rasaq Salinsile faction of the party described the development as a big slap on the face of genuine progressive politics.

The Rauf Aregbesola’s camp called on its members to stay put within the party, reiterating their resolve to remain as active members of the APC in the State notwithstanding the extent of impunity within the party.

The remark was made by Abiodun Agboola, the faction’s Publicity Secretary and obtained by Theadvocate.ng

The faction stated that it took the decision after a stakeholders’ meeting.

According to him,  there id a grand sinister move by the Osun Governor, Adegboyega Oyetola-led IleriOluwa faction to blackmail them out of the party.

According to Agboola, “We urge good spirited Nigerians to ignore Governor Oyetola-led IleriOluwa and cohort’s mischief that we are planning to leave the party. Our tendency is still part and parcel of Osun APC.

“We are the original inheritors and proud sustainers of the progressive politics and governance in Osun and, therefore, cannot leave it for someone who has not offered the people tangible democratic dividends in about four years now.”

While noting that its conviction to pursue a desired new order and restoration of rights, sanity and true progressive ideology became stronger with the conclusion of the APC’s national convention, the faction added that it would not abandon the party’s platform for fair weather friends and their sponsors.

“As authentic members of the APC, who worked assiduously for the restoration of progressive movement to government in Osun State, and has not engaged in free window political transfers like the Oyetola people, it will be absurd for us to leave the party for the unprincipled politicians who don’t mind it sinking if it comes to that.

“The cloudy situation in Osun APC is a passing phase, which will definitely come to an end by the grace of God who has not, and will never support treachery and the patriotic zeal of the new management team of the APC at the national level who desires success for the party,” he added

Previous: 2023 Presidency: Buhari yet to annoint any successor, says Sen Abe
Next: 2023: Politics should not be do or die affairs- Abia Speaker