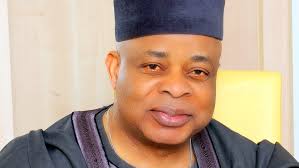 The Acting State Caretaker Chairman of the All Progressives Congress, APC, Enugu State chapter, Prince Chukwunta Nnaji has denied the report making the rounds, accusing Senator Ken Nnamani of engineering the shutting out of legacy foundation members of the party.

It should be noted that Nnamani is the South-East representative at the Caretaker and Extraordinary Convention Planning Committee, CECPC, of the ruling party.

Nnaji was responding to SOS message earlier sent to President Muhammadu Buhari by some members of the party,

They accused the former Senate President was muscling out foundation members of the party.

Spokesperson of the party in the State, Mrs. Kate Ofor had alleged that: “Foundation members of APC in the Enugu State gradually improved the electoral fortunes of our great party from 2015 to 2019 general elections; we need to improve more especially with registration of new members.

“However, we wish to appeal that the flagrant breach of Article 20 of the APC Constitution by Senator Ken Nnamani’s imposition called consensus be urgently addressed before the October 2, 2021 State Congress.”

He was of the opinion that Senator Nnamani did not supervise Enugu State but the entire SouthEast zone.

He stated that in the course of the congresses, Nnamani had participated in his ward and local government alone and did not participate in any other ward of LGA.

He highlighted that any issues raised by anybody ought to be directed to the appeal panel which had been set up by the party to address any issues arising from the Congresses.

He added that “anybody doing otherwise is merely playing to the gallery and thus should not be taken seriously as these were people who had sought to highjack the process but failed.”

Previous: 2023 Presidency: Jonathan may end up being disgraced if he contests- DG PGF
Next: Rivers APC spokesman resigns