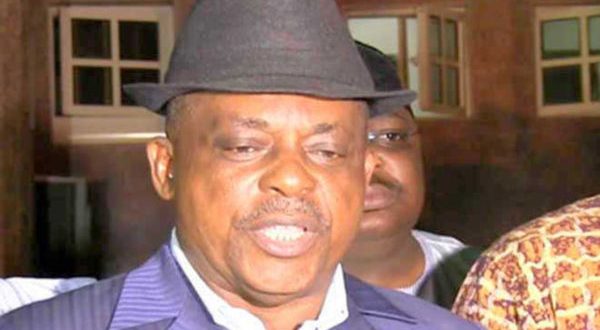 Every sector is falling apart under Buhari’s govt- PDP

The National Chairman of the Peoples Democratic Party on Monday lamented that that Nigeria is falling apart under President Mohammadu Buhari-led All Progressives Congress, APC.

The Chairman of the major opposition made this assertion at a rally for the party’s rally for Bayelsa West Senatorial District at Sagbama, in Bayelsa State.

Acccording to Seconds, every aspect of the country’s sector including economy and security sectors are totally in bad shape.

He noted that to fix Nigeria, the only way is to ensure that there is credible people in the legislative chambers of the country.

He noted that the only chance of redemption was to put credible people in the National Assembly who would be able to make laws in defence of Nigerians.

Secondus said, “Today, as we stand here to speak to you, Nigeria is fast becoming a failed state. The only rescue is to put quality people in the National Assembly who can go there to make laws in defence of the people.

“Everywhere has broken down. Security and the economy are breaking down. The Government of APC has failed. You can imagine a bag of rice that was N18000 is now N30,000, and the Dollar, which was exchanging for between N180 and N230 is now N500.

“I can tell you that this is the most trying period for our nation. The country is gradually falling apart.”

He added, “Finally, I want to advise our Commander-in-Chief that the country is falling apart. He should not make things worse because If he denies the people their votes, he will make the situation worse.”

Previous: Ex-Katsina State Governor denies report of defection to APC
Next: FG reacts as a Nigerian gets key political appointment in Biden’s cabinet