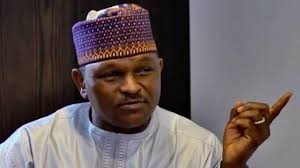 The former Chief Security Officer of  late Military Head of State, Sani Abacha, Hamza Al-Mustapha has won the presidential ticket of the Action Alliance (AA) ahead of the 2023 general election.

It was learnt that the retired military officer  won the party’s primary with 506 votes, defeating his only opponent Samson Odupitan, on Thursday in Abuja.

851 delegates were accredited, while 721 votes were cast.

It was also learnt that two .of the party’s presidential aspirants, Sen. Tunde Anifowose and Amb. Felix Osakwe had earlier stepped down from the presidential race for Al-Mustapha.

The former presidential aide  was declared winner of the presidential primary election by the party’s chairman, Chief Kenneth Udeze.

Udeze said  that the exercise that led to his emergence was one worthy of emulation by other parties.

Chief Kenneth Udeze declared, “I congratulate those who contested and those who withdrew; this election exercise is an indicator that we are united and united we stand,” he said.

Responding, Al-Mustapha hailed the party’s National Electoral Committee for conduction a credible and peaceful conduct of the election, calling on party supporters not to relent in ensuring that AA emerged victorious in 2023 polls.

“I appreciate all party delegates, supporters, and officials of the Independent National Electoral Commission (INEC) who have all defied the rain to witness this event.

“I promise that our votes cast today would not be in vain and I indulge us to please obtain a permanent voter card (PVC), because that is the surest way to be victorious come 2023 general election,” Al Mustapha said after he was declared winner.

Previous: Tinubu will be a worthy successor of Buhari- Uzodinma
Next: Osun 2022: Destruction of Adeleke’s campaign bill boards could backfire- PDP warns APC