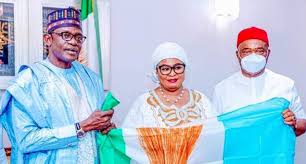 A former Aviation Minister in President Goodluck Jonathan’s administration, Senator Stella Oduah, has joined the leagues of politicians who dumped the Peoples Democratic Party (PDP) for the ruling All Progressives Congress (APC).

Speaking through APC Director of Publicity, Alhaji Salisu Na’inna Dambatta,  Buni assured the former minister that despite being a new member, the party would accord her all the rights and privileges of other bona fide members of the party.

“You (Oduah) will enjoy the privileges enjoyed by all members of the party because you will have a waiver,” Bunu said.

Oduah, is currentlyrepresenting Anambra North in the Senate.

According to her, the decision to defect was part of the process to change the political narrative in the Southeast.

She said she joined the APC with the consent of her supporters, who she added were celebrating the move in Anambra State.

Previous: Just in: PDP confirms Akinwonmi as its Acting National Chairman
Next: PDP to Buhari: You are the one stirring hatred, division, not gov Ortom