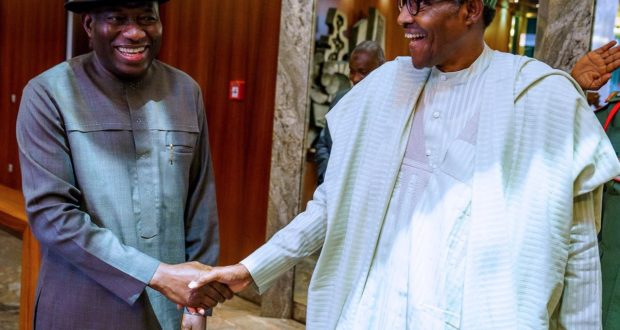 Ex-President Jonthan meets Buhari, briefs him on mission to Mali

President Muhammadu Buhari and former President Goodluck Jonathan has met behind closed doors at the Presidential Villa in Abuja.

It waa leart that during the meeting, Jonathan briefed the President about his follow up mission to Mali.

The former President led a special team to Mali in a bid to bring a lasting solution to the leadership crisis in the country.

The Jonathan led-delegation to Mali had recommended a unity government for the landlocked, West African country and he expects that the Malian President would set up the unity government soon.

President Buhari’s meeting with his predecessor comes just three days after he approved the naming of the Railway Complex in Agbor – the operational hub of the Itakpe-Warri line – after him (Jonathan).

Presidential aide Tolu Ogunlesi had announced the news on Saturday via Twitter.

The facility will now be known as the Goodluck Jonathan Railway Station and Complex, Ogunlesi said.