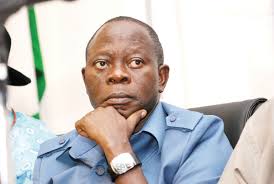 Abdulkarim said in an interview with newsmen on Thursday in Sokoto that Oshiomhole has demostrated poor performance since taking over which reduced the party’s capabilities.

“I am 100 percent in support of the call for Oshiomhole to step down for the party to have good leadership that will lead to its progress.

” The party’s national chairman is supposed to lead the party to capture more states, give it right leadership and direction.

” The essence of politics and political party is to win elections, if it fails then it’s not a party, ” Abdulkarim said.

He noted that Oshiohmole had met APC leading in 26 states, but ended up losing Bauchi, Adamawa, Oyo, Imo and Zamfara to the opposition.

“Loosing control in six states is too much blow for members to bear. If Oshiohmole does not quit, the APC will be dead by 2023,” Abdulkarim said.