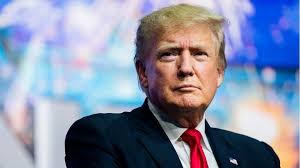 The former President alleged that the family member and the media house engaged in an insidious plot to obtain his tax returns for the paper’s Pulitzer Prize-winning investigation of his finances.

“The defendants engaged in an insidious plot to obtain confidential and highly-sensitive records which they exploited for their own benefit and utilized as a means of falsely legitimizing their publicized works,” the lawsuit says, alleging they were “motivated by a personal vendetta.”

The New York Times and the three journalists won the Pulitzer in 2019 for their investigation of the Trump family’s finances, which the Pulitzer Prize Board said “debunked his claims of self-made wealth and revealed a business empire riddled with tax dodges.”

The newspaper’s story alleged that Trump had received more than $400 million in today’s terms from his father’s real estate empire, much of it through fraudulent tax schemes.

Mary was the daughter of the eldest Trump brother Fred Trump Jr, who died in 1981 from complications due to alcoholism.

In her no-holds-barred 2020 memoir, “Too Much and Never Enough: How My Family Created the World’s Most Dangerous Man,” she revealed that she was the primary source for the New York Times investigation.

Trump’s 27-page lawsuit asserts that the New York Times reporters relentlessly sought out his niece, Mary L. Trump, and convinced her to smuggle the records out of her attorney’s office and turn them over to The Times.

Times reporter Craig tweeted early Wednesday: “I knocked on Mary Trump’s door. She opened it. I think they call that journalism.”

The lawsuit alleges that, by providing information, Mary Trump was in violation of a non-disclosure agreement signed in 2001 after a settlement over the estate of Donald Trump’s father, Fred Trump Sr.

The former president is seeking $100 million in compensation and damages, as well as all the proceeds from his niece’s book.

In a statement quoted by NBC, Mary Trump called her uncle “a loser.”