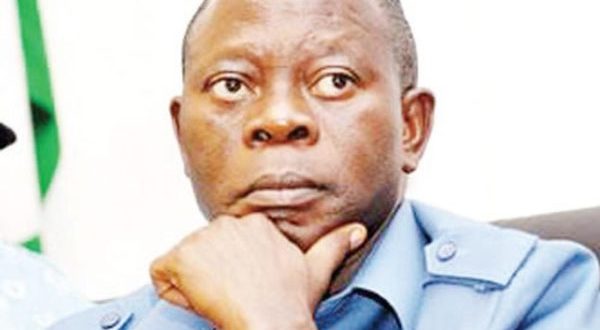 Ezeife to Oshiomhole: Resign now, you have damaged APC’s soul

A chieftain of the All Progressives Congress (APC), Chief Eze Chukwuemeka Eze, has asked the National Chairman of the party, Comrade Adams Oshiomhole, to apologise and resign before it’s too late.

In a press release forwarded to newsmen on Sunday morning, Eze also advised the APC national chairman to stop making further mockery of himself in order not to murder what remains of his person and integrity.

According to Daily Post, the governing All Progressives Congress(APC) had lost Oyo, Bauchi, Adamawa, Zamfara states during the 2019 general elections, as well as Bayelsa state.

According to the APC chieftain, “With 14 out of 19 state governors elected on the platform of APC endorsing the formal removal of Comrade Adams Oshiomhole, as the National Chairman coupled with his rejection by most APC stakeholders in Edo State and entire South-South region, it is obvious that instead of indulging in fruitless propaganda, Oshiomhole should take the honourable option by handing in his resignation.

“While it is obvious that Oshiomhole would not continue in office as national chairman under the present circumstances, the purported query issued to Chief Victor Giadom, the interim Coordinating Officer of APC by Oshiomhole is childish and laughable, because being suspended, he lacks the power to do so”.

Eze commended President Muhammadu Buhari and the national leader of the All Progressives Congress,(APC) for their position relating to the current impasse rocking the party.

“I wish to commend President Muhammadu Buhari for consenting to the emergency NEC meeting knowing that it offers a unique platform to resolve the multifaceted challenges rocking our great party and distracting his administration from realizing the giant vision in infrastructure, especially roads and railway transportation.

“It is for this reason that President Buhari’s wise decision in consenting to this emergence NEC becomes commendable because the meeting will go a long way towards rebuilding and strengthening the party for better electoral outings.

“The President’s action will strengthen the party and make it more vibrant, cohesive and united to face the task of giving valuable pieces of advice to government for better running of government for the good of Nigerians and winning the 2023 general elections”.

He added, “Also, wish to commend Asiwaju Bola Tinubu, for distancing himself from the damaging style of the outgoing national chairman, which goes to prove that the embattled Oshiomhole actually wreaked serious havoc on the soul of the APC”.

Eze equally commended the South/South APC Caucus, for their collective resolve to support Chief Victor Giadom’s nomination as acting National Chairman, having proved himself capable to run the party creditably and in line with the zoning of the post to the South/South region at the moment.

He noted, “The noise from the party was not only caused by the suspended national chairman’s high handed, avaricious and fickle minded style of leadership but also for the impunity and exclusion of critical stakeholders in the management of the entire party structure from wards to the national level”.

Eze used the opportunity to caution those who have taken the party’s internal matter to court in an alleged efforts to scuttle the emergency National Executive Committee(NEC) meeting to withdraw them so as to avert the severe sanctions of the party’s disciplinary procedure.

“It is the height of indiscipline for aggrieved party members to rush into litigation without first exhausting the internal dispute resolution mechanism of APC. These class of litigants whose intendment is to abort the emergency NEC should know that their action amounts to an affront to the leader of the party, President Buhari, who has given his nod to the event,” he posited.

Some party chieftains had kicked against the NEC meeting.

They called the invitation to NEC members announced by Victor Giadom, the Deputy National Secretary, illegal, stating that the APC constitution provides how a NEC meeting shall be convoked.

“Victor Giadom is not vested with any constitutional powers to convene any NEC meeting, neither has he been so directed by the National Chairman”, their joint statement read