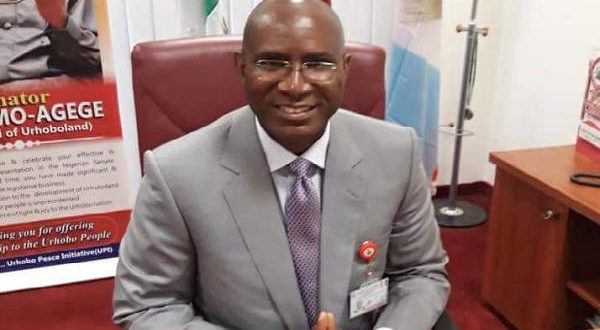 Faceless political foes trying to pull me down, says Omo-Agege

Deputy Senate President Ovie Omo-Agege has said the failed suit seeking to disqualify him for allegedly being an ex-convict in the United States (U.S.A) is a mere political distraction.

A statement by his media aide, Yomi Odunuga, said Omo-Agege spoke at the weekend in Abuja when monarchs, elders and religious leaders from Urhobo Kingdom visited him.

According to the senator, faceless political foes were bent on distracting the National Assembly leadership from working with the Executive to deliver the dividends of democracy to Nigerians.

The senator said the failed attempt to remove him from office may not be unconnected with 2023 political intrigues.

Justice Othman Musa of the FCT High Court last week dismissed the suit challenging Omo-Agege’s eligibility for allegedly being a conviction in the U.S. The court held that the case was a non-criminal trial, and awarded N1 million fine against the claimants, a hitherto unknown Incorporated Trustees of Patriotic Youth Organisation of Nigeria, for wasting the time of the court.

The statement reads: “I am not a politician who can be intimidated by anybody; for those enemies at home, they know me very well but I am sure those who participated did so with cover from others outside who really did not know me well.

“If they knew, like the local enemies, that I am not easily intimidated, I am very sure they wouldn’t have gone on this fruitless voyage. This is not the first time we have been through this; I pray it is the last time. But to the extent they chose not to make it the last time, they also have me to contend with because I don’t suffer fools gladly.

“For those who don’t know, they will get to know in the not too distant future. I saw all of it and those behind it as mere irritants who were determined to distract me and the leadership of the National Assembly from working with the executive to enable us deliver the dividends of democracy to the people.

“I am glad and indebted to the leadership of the Senate and my colleagues who saw through this from the very outset and called it what exactly it is – they were just people who were mischievous, doing permutations with respect to 2023 when no one knows who will be alive tomorrow.”

The delegation’s spokesperson Prof. Sam Ibodje warned “mischief makers” to leave their son alone or incur the wrath of the Urhobo nation.