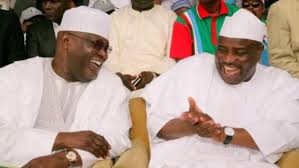 Facts emerge on how Tambuwal steps down for Atiku

There were more facts on how former Vice President Atiku Abubakar beat 14 other aspirants to clinch the presidential ticket of the Peoples Democratic Party (PDP) on Saturday.

It was learnt that two last-minute negotiations with presidential aspirants from the North, especially Sokoto Governor Aminu Tambuwal, gave Atiku the cutting edge over his closest rival, River State Governor Nyesom Wike. The former Vice-President had 371 votes as against Wike’s 237.

The Nation gathered that before agreeing to step down, Tambuwal had been in talks with Atiku for the position of President of the Senate in 2023.

However, the intervention of a former National Security Adviser (NSA), acting on behalf of some founders of the Peoples Democratic Party (PDP), made Tambuwal to back Atiku.

The same forces accounted for the withdrawal of another aspirant, Mohammed Hayatu-Deen, from the race in the early hours of Saturday.

Also, in order to give all Northern aspirants the benefit of the doubt, Atiku also held a meeting in Transcorp Hilton with Tambuwal, Dr Bukola Saraki, Governor Bala Mohammed of Bauchi State and Hayatu-Deen on the need to present him as a common front against Wike.

The Transcorp Hilton session was triggered by an intelligence report that Wike, who had a big war chest, might clinch the ticket without a united North.

Sources at the meeting said the Bauchi governor stormed out after claiming that he was confident of getting the PDP ticket.

Former Senate President Saraki also said he preferred to go the whole hog based on the facts and figures available to him that he was going to triumph at the primary.

A source, who spoke with our reporter in confidence said: “As at Friday, the situation was still dicey because Wike gave a good fight and his war chest was massive. For five hours, Atiku was on the phone pleading with all the delegates one by one. He succeeded in reaching out to 95 per cent of the delegates.

“In order not to take chances, it became apparent that there must be some realignment and closing of ranks by Northern aspirants. A former National Security Adviser, Gen. Aliyu Gusau, who probably acted on behalf of the founding fathers of PDP, had a meeting with Atiku and Tambuwal at his residence in Abuja.

“The meeting was more or less the icing on the cake because Atiku and Tambuwal had been having covert meetings for about three weeks with an offer of a Senate presidency for the Sokoto State governor if Atiku wins..

”The intervention of the ex-NSA wrapped up all the covert meetings by Atiku and Tambuwal.

“The Sokoto State governor agreed to step down for Atiku but with a caveat that it will be at the last minute when it will be difficult for other aspirants, especially Wike, to press any button to change the equation.”

Another source spoke of Atiku’s olive branch to other Northern presidential aspirants in Transcorp Hilton on Saturday.

The source said: “As part of the agenda of a united North to curtail the hurricane influence of Wike on delegates, Atiku met with aspirants from the North in Transcorp Hilton on Saturday.

“The PDP presidential flag bearer had offers to accommodate all the aspirants, including Office of Chief of Staff for Saraki, a ministerial appointment for Hayatu-Deen, second term governorship ticket for Mohammed (Bala) and of course Tambuwal for Senate presidency.

“But at the session, the aspirants did not allow the presentation of negotiation terms. They considered Atiku as being in a weak position for him to have called for the meeting.

“Governor Bala Mohammed, who was sure of victory, stormed out. Saraki said he wanted to complete the race having done his homework well that he could get the ticket. Hayatu-Deen, who had been spoken to by some Northern elders, opted to withdraw.

“But Tambuwal, who was privy to the agenda of some Northern leaders and founding fathers of the PDP, was only tagging along at the meeting. He was enjoying the “accord ‘concordiale”’ with Atiku without suspicion by other aspirants.

“In line with the deal, Tambuwal acted the script at the nick of time at the convention ground. Beyond Sokoto, Tambuwal rallied his supporters nationwide to back Atiku.

“Although Kano delegates were holed up somewhere by Wike’s strategists, calls were made to them on the Northern script for Atiku and most of them complied.”

There were reports yesterday that Wike got an intelligence report on the gang-up when it was too late for any remediation.

A source in Atiku’s camp said: “We suspected he got intelligence of the final intrigues when he came up to say that he will support whoever wins at the primaries.

“We realised that Wike had gone far and may cause an upset. It became necessary to realign forces and curtail him.”

As of press time last night, it was gathered that Atiku may leave Abuja for Dubai today (Monday) to take what a source described as a “well-deserved rest.”

The source said: “Despite the stress of the presidential primaries, Atiku held a wrap up meeting with his campaign team on Sunday on the next stage of his campaign.

“By Monday, he will go to Dubai for a break and reinvigoration.”

Previous: Agitations by IPOB should make should make APC, PDP zone presidency to South East
Next: 2023 Presidency: APC to begin screening of the today