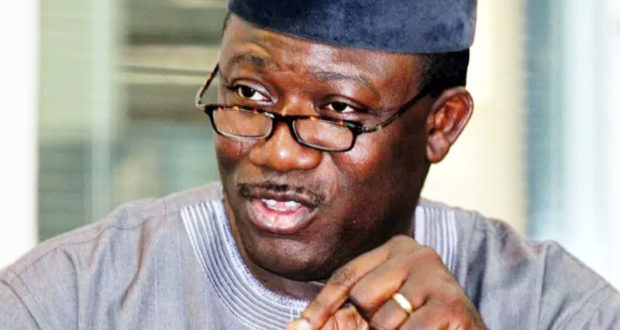 Fayemi’s second term a disaster, the worst in history of Ekiti- APC chieftain

A chieftain of the All Progressives Congress (APC) in Ekiti State, Otunba Olusegun Agbalajob has downgraded the administration of Governor Kayode Fayemi of Ekiti.a

According to him, his administration may be the worst in the history of the state with its alleged poor performance.

He alleged that the Fayemi-led second term administration has become one of the biggest disasters that have befallen Ekiti since its creation in 1996, considering the lacklustre leadership being exhibited in piloting the affairs of the state.

In a statement yesterday in Ado-Ekiti, Agbalajobi said Governor Fayemi has made a disappointing showing within the two years in the saddle, in contrast with the performance of his predecessors, describing him as “an incurable failure par excellence.”

The former governorship aspirant alleged that Fayemi had pulled the gear of the progress of the state to reverse mode, saying his frequent absence from the state had compounded the issue, as it adversely impacted on the fulcrums governance and development in Ekiti.

Agbalajobi alleged that there was lack of governance in the state, describing the Fayemi-led government’s performance as abysmal monumental failure.

He added that indicators of good governance in the last two years were in the negative mode.

Countering Agbalajobi’s position, the Special Assistant on Media and Public Communication to the Governor, Mr. Segun Dipe, said the criticism was a crass display of viciousness and ignorance.

He said the criticism showed the desperation of Agbalajobi to pull down the Fayemi administration at all cost, adding that no amount of blackmail would distract the governor from effecting socio-economic development.