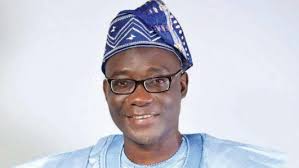 “Fayose has betrayed me,” says ex-Ekiti dep gov as he withdraws from senatorial race

In a letter, he personally signed and addressed to the National Chairman of the PDP, Olushola said that he even entered the race due to pressure from former Governor, Ayodele Fayose.

According to him, the former Governor, who led him into the race, has subsequently chosen to back another candidate for the same position.

This was contained in a letter entitled ‘Notification of Withdrawal from Senatorial Contest’.

“…It is expedient to note, however, that the senatorial ambition was the making of former Governor Ayodele Fayose,” he said.

According to the former Deputy Governor, Fayose had sent emissaries to him, asking him to run for the post and he had to yield to the pressure from concerned stakeholders.

“To my great surprise, Mr. Ayodele Fayose, who openly endorsed my candidacy for Senate in my town, discretely aided another person from the same constituency to pick the same senatorial form.

“I’ve consulted widely and have decided not to dwell where there is no sincerity of purpose but an arrogant display of deception and hence, pulled out from the contest,” the letter read in part.