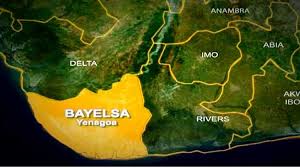 Some unknown gunmen have killed Mr Sunday Frank-Oputu, factional leader of the All Progressives Congress (APC) in Bayelsa State.

Frank-Oputu was a strong supporter of a suit contesting the legality of the recently conducted ward, local government and state congresses of the APC in a Bayelsa High Court.

Frank-Oputu, an indigene of Igbomotoru community in Southern Ijaw Local Government Area, was reportedly killed in an execution like style around 11:50pm yes at his Bay-Bridge residence, Yenezue-gene, Yenagoa.

It was learnt that his assassins allegedly shot him dead through his window which was open to enable him to receive fresh breeze as there was no light in his neighbourhood.

The deceased vehemently condemned the attack on a High Court where the presiding Judge, Justice Nayai Aganaba, was stoned with plastic bottles by hoodlums.

Frank-Oputu had vowed to follow up the matter to a logical conclusion before his untimely death.