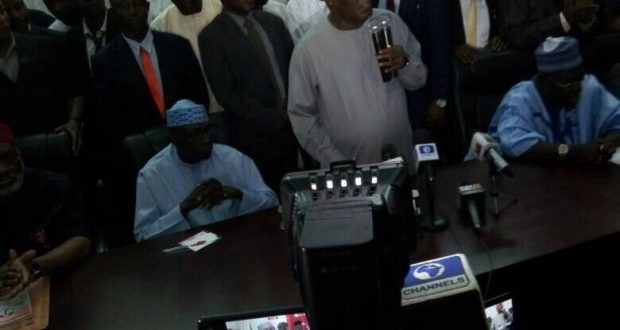 The caretaker chairman of the People’s Democratic Party (PDP), Ahmed Makarfi, has said that fear was the reason the All Progressives Congress (APC) had failed to hold its national convention for many years.

Makarfi stated this, on Tuesday, in Abuja, when he received the chairman of the Steering Committee on the Development of Strategic Plan for the National Institute of Legislative Studies, Aminu Shagari, and members on a courtesy visit.

Reacting to Makarfi’s assertion,the national publicity secretary of the APC, Bolaji Abdullahi, said the claim “is an empty platitude” lacking in substance.

“We don’t respond to this kind of empty platitude lacking in substance. Did the PDP say why they are saying we are afraid? If they said we are afraid, afraid of what or who? We won’t dignify their assertion with a response.”

Previous: Wike to FG : You are aiming to use SARS to rig 2019 election
Next: PDP National Convention: ‘Only Bode George can take the party to its Eldorado’ – Lagos lawmaker