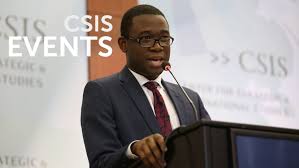 It has become official; US President-elect Joe Biden on Monday formally appointed Nigerian-born Adewale Adeyemo as the Deputy Treasury Secretary.

Reacting, the Federal through Abike Dabiri said: “It’s official! Wale Adeyemo becomes the first ever Nigerian American Deputy Secretary of the US Treasury, in the history of the,” Dabiri tweeted.

Currently, Adeyemo is the President of the Obama Foundation non-profit, and this new appointment would make him  the first African-American in that role.

Adeyemo graduated from the University of California, Berkeley, with a bachelor’s of arts.

He thereafter, moved to to Yale Law School, where he bagged his Juris Doctor for further studies in specialised law.

Before his appointment as the President of Obama Foundation, Adeyemo was the deputy chief of staff at the department of the treasury, a position he held for three years.

He has served in various positions at treasury, including senior advisor to the chief of staff and deputy executive secretary.