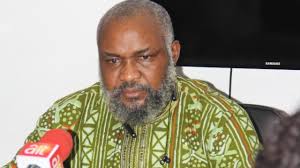 Human Rights Writers Association of Nigeria, HURIWA, has warned the All Progressives Congress, APC, against picking a Northerner as its presidential candidate for the 2023 general elections.

This warning came on the backdrop of the emergence of Alhaji Atiku Abubakar, a Northeasterner, as the presidential candidate of the main opposition Peoples Democratic Party, PDP, on Saturday.

HURIWA, in a statement by its National Coordinator, Comrade Emmanuel Onwubiko, said it believes that picking another northerner to battle Atiku in the presidential race will totally destabilise the peace and unity of Nigeria.

The group, therefore, warned the APC to move against picking a northern candidate and make a southerner its presidential flagbearer in the spirit of fairness and to preserve the unity of Nigeria.

HURIWA warned that “should APC concede her ticket to the North, it, therefore, signposts the end of Nigeria as a united country.”

The APC’s presidential primary now comes up in the first week of June and Nigerians are eagerly waiting for the outcome, having seen the choice of the PDP.

“There is no longer any basis for anyone to preach unity in Nigeria when the South-East is ostracised politically and then the North continues to insist on producing the President of Nigeria for 16 years if another northerner is produced in APC after the eight years of President Muhammadu Buhari who is from Katsina State in the North-West,” HURIWA said.

HURIWA urged the APC to “give its ticket to the South-East or at least the Southern region so as to preserve the unity of Nigeria or else if APC goes North like PDP, it is a vote of no confidence on the continuous existence of Nigeria.”