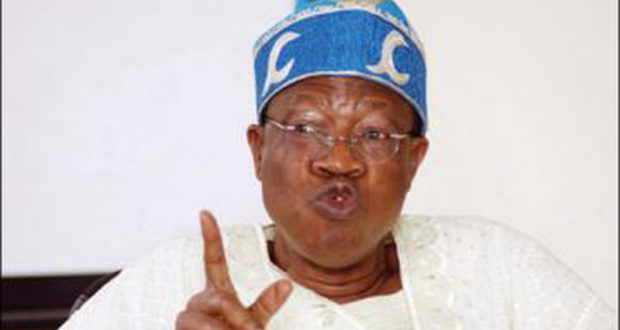 The Minister of Information and Culture, Alhaji Lai Mohammed, has attacked the Peoples Democratic Party (PDP) and its presidential candidate, Alhaji Atiku Abubakar, saying that they deserved to be prosecuted for allegedly presenting fraudulent evidence before the Presidential Election Petitions Tribunal.

The minister said this in a statement issued on Thursday in St. Petersburg, Russian Federation, where he is leading Nigerian delegation at the ongoing 23rd General Assembly of the United Nations World Tourism Organisation (UNWTO).

The statement signed by Mr Segun Adeyemi, the Special Adviser to the minister, was made availablle to newsmen on Thursday in Abuja.

“Instead of casting aspersion on the judiciary with their poorly-framed reaction to the ruling of the Tribunal, the PDP and its candidate should be thanking their stars that they are not being prosecuted for coming to court with a fraudulently-obtained evidence.

“It is intriguing that a party that trumpets the rule of law at every turn will present, in open court, evidence it claimed to have obtained by hacking into a supposed INEC server.

“Don’t they realise this is a criminal act for which they are liable?

“Instead of threatening to head to the Supreme Court, driven more by ego than commonsense, they should be sorry for allowing desperation to overwhelm their sense of reasoning.

“Enough is enough,” the minister who is the Vice President (Africa), UNWTO said.

Mohammed said that Atiku and PDP should apologise to Nigerians for wilfully distracting President Muhammadu Buhari’s administration with a frivolous election petition, instead of appealing the Wednesday’s ruling of the tribunal.

He noted that while the PDP and its candidate reserve the right to pursue their petition to the highest level, “they would be better served by dropping their toga of desperation and realising that there is a limit to tomfoolery.

“Nigerians are tired of this orchestrated distraction, and will rather wish that the opposition, having lost at the polls and in court, will now join hands with the government to move Nigeria to the next level.