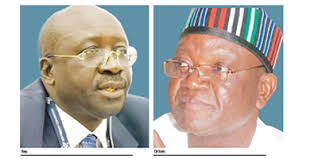 This is because the position of Governor Samuel Ortom as leader of the party in the state is being threatened and his chances of winning a senatorial election in 2023 are shaky.

This is sequel to alleged moves by the PDP national chairman, Dr Iyorchia Ayu, who Ortom played a key role to make chairman, to dump the governor and allot the senatorial ticket to an aspirant he prefers.

It was gathered that the trio of Ayu, Ortom and a former governor of the state and now senator, Gabriel Suswam, have anointed candidates for the governorship and National Assembly seats, especially in zones A and B, Daily Trust reports

It was hinted that when the three political bigwigs met on March 31, 2022, to reach a consensus on the governorship slot which has been zoned to Jechira Federal Constituency and micro-zoned to Vandeikya LGA, Dr Ayu, a former senate president and three-time minister, and Gov Ortom clashed.

Sources said the meeting ended in a stalemate because Ayu insisted on handing the ticket to Rt Hon Titus Uba, the speaker of the house of assembly, while Ortom had his eyes on another aspirant.

Party supporters loyal to Ortom claim that if Ayu succeeds in installing Uba as governor with his position as national chairman, Ortom would be relegated to the background in the scheme of things in the state.

It was also learnt that while Senator Suswam backed Ortom as the leader of the party in he state to choose the 2023 governorship candidate but Ayu stood his ground.

A source said, “In my opinion, the zoning was rightly done in favour of Vandekiya, but the problem is the crisis that is brewing from it.

“While most of us will prefer Ityavyar, the governor’s choice, Ayu wants to force Uba on us. But Ayu can’t be the decider for the party in the state; he would be tearing the party apart if he insists.”

It was further learnt that if Ayu succeeds in handing over the ticket for Gboko/Tarka Federal Constituency to his Ipav brother, Mr Terzungwe Atser, against Ortom’s preferred candidate, John Idyegh, whom he (Ortom) influenced to defect from the All Progressives Congress (APC) to the PDP, the governor’s chances of going to the senate would be slim.

Already, the Idoma-speaking Zone C of the state and some elements from Kwande are disenchanted with the consensus arrangement, thus calling for an open contest.

An aspirant for an office from the Idoma side said, “Why are Ortom and Ayu playing tribal sentiments in Benue while they preach it differently at the national level? I think instead of the confusion brewing over this micro-zoning to Vandekiya, the Idoma-speaking area of Benue South Senatorial District should be given the privilege to produce a consensus candidate in the spirit of fairness, equity and justice.”

Meanwhile, Mr Nathaniel Ikyur, the chief press secretary to Gov Ortom, in a statement, has debunked the claim that Ayu and Ortom are clashing over consensus candidates.

When contacted, Simon Imobo-Tswam, the special assistant on communication and strategy to Dr Ayu, said, “Please, I don’t comment on rumours.”

Previous: Benue: Ortom reinstates aides who resigned to contest elections
Next: Why marginalization of Igbos is a well orchestrated plot- APC chieftain