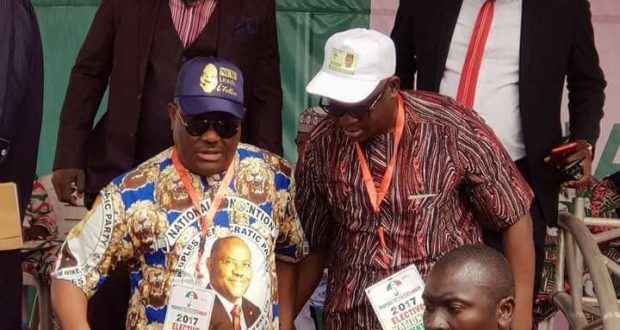 Fresh crisis looms in the Peoples Democratic Party (PDP) except an urgent measure is put in place to check the development.

This came into light as top aspirants of the party’s Chairmanship position, kicked against the development which saw Uche Secondus emerged the new Chairman of the PDP.

Tunde Adeniran, the consensus candidate of the South-West who until the very dying minutes, was favoured to clinch the position, alongside another aspirant, Raymond Dokpesi, stormed out of the venue of the National Convention of the party in Abuja.

The two had in separate interviews with journalists, accused Rivers Governor, Nyesom Wike and his Ekiti counterpart, Ayodele Fayose of doctoring the outcome of the election through a controversial ‘Unity List’ said to contain names of all aspirants favoured for all the elective positions by the two governors and their allies.

Before now, Bode George a Chieftain of the party and a major aspirant for the Chairmanship position, had on a day before the National Convention, dropped out of the race claiming that Wike was behind his decision.

He accused the Rivers governor of insulting the Yoruba race by saying that “they(Yoruba) have contributed nothing to the development of PDP.

Wike in a direct response to George, had while maintaining his respect for the PDP BOT member, chides him for cowardly withdrawing from the race, describing the action as too hasty.

For his part, a fuming Dokpesi had at a press conference on Saturday at the Eagle Square venue of the Convention, expressed his disappointment at the process of the election.

“Since we started voting about three hours ago, every delegate that is available has been provided with copies of what you have here. They call it ‘Unity List’ and all the names on the list are number one in all the cubicles for voting and this is supposed to be a list prepared by the governors,” he said.

“I have personally approached Gabriel Suswam, former governor of Benue state, who is involved in the management of the electoral process. He told me that he was taking necessary steps. He even told me that he collected this list from a governor who was distributing it.

“I also approached Governor Okowa of Delta state who is the Chairman of the Convention Committee. He is also helpless. The names you find here is not unlikely what would be announced at the end of the day.

“The Chairman of the Convention Committee said he is aware of the whole thing but there is little he can do. He is overwhelmed… This election has been seriously marred.”

Wike, in the period leading to the Convention, said governors reserve the right to support candidates of their choice.

“I have a right to support any candidate of my choice, and I do not see how that can be said to be imposition.

“Making statements that some people have hijacked the party is not correct, with all due respect, we are not playing sentiments, the people know what they want,” he said