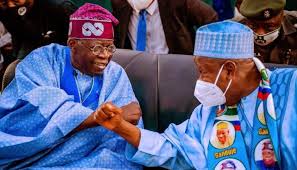 Ganduje describes Tinubu as a man of integrity that Nigeria needs

The Governor of Lagos who is the presidential candidate of the All Progressive Congress APC Bola Tinubu has been described as a man of integrity.

This was disclosed by the Governor of Kano State  Abdullahi Ganduje in s statement he released on Thursday.

According to him, a government under Tinubu would fastrack  national growth and development.

He made this remark  while accepting an appointment as the APC National Integrity Movement (ANIM) patron at the Government House, Kano.

”Tinubu’s track records and pedigree show that he can propel Nigeria to greatness if elected president.

“Asiwaju is a man of integrity and a good product. He has contributed significantly to the growth and development of our democracy.

“He is a consummate democrat and the leader of progressives who fought to bring the democratic rule that Nigerians are enjoying today,” he said.

He, therefore, urged ANIM to consolidate their support and advocacy for Tinubu after the presidential election in 2023.

The Governor of Kano State was one of the allies who supported the former Governor of Lagos State to win the APC primaries, which made Tinubu emerge as the party’s presidential primaries.

Previous: This is not 1993, Muslim-Muslim ticket uncivilized- CAC President
Next: Wike should be commended for fighting a national course- APC chieftain