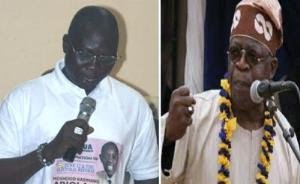 Bola Tinubu Disciples Organisation has come down hard on Gani Adams over his recent disparaging comments against Asiwaju Bola Tinubu, national leader of the ruling All Progressives Congress (APC).

The group’s coordinator, Hon. Agarawu Wasiu in a statement described Adams as an ingrate who is hell-bent on tarnishing Tinubu’s image.

The statement reads “Our attention has been drawn to an interview granted Gani Adams by The Heritage Online Television, where Gani Adams threw decorum, decency and respect for elders, cardinal attributes of a true-born Yoruba, to the wind, to throw feeble verbal jabs at Asiwaju Bola Ahmed Tinubu, over the issue of much-taunted Restructuring of Nigeria, of which he knows very little about, calling him unprintable names.

Having critically watched, listened and examined the interview the Bola Tinubu Disciples Organization (BTDO), deem it necessary and important to respond to the unruly and unwarranted vomits of the so-called Aare Gani Adams, in his unhidden and unbridled but vain desperation to smear the good image of Asiwaju Bola Tinubu.

It is on record that the coming into the limelight of Gani Adams, was offshoot of the support he enjoyed from Asiwaju Bola Tinubu .

Gani Adams, was one time prominent Okada rider on the streets of Mushin and became popular through his notorious activities. He graduated from Okada riding to a “cut and nail carpenter” in Mushin.

We are abashed that Adams could have easily forgotten the roles Asiwaju Tinubu played in his climb to the stardom he is now finding so difficult to manage. Asiwaju played the father for Adams when he wedded. When he was declared wanted by then Lagos Police Commissioner, Mr Mike Okiro, it was same Asiwaju that saved him. This ingrate would have been wasted by Okiro, but Asiwaju Tinubu rose up and stood firmly by him.

There was a particular night, when Okiro and his team were hell bent on eliminating the blood sucking brigand, Gani Adams, who was terrorizing the entire Lagos and Ogun States at that time over his untutored agitation for Yoruba autonomy, leading to barbaric killings of Police men, wrecking havoc and causing unrest in South West States of Nigeria.

This is the man who was rehabilitated by Asiwaju Bola Tinubu to become what he is today, after he was released from Kikikiri Maximum Prison.

It is imperative to inform the general public to ignore the hungry, rampaging loafer who is hiding under a struggle for the freedom of Yoruba to propagate the interest of his party, the PDP where he is a contractor and a corporate beggar.

He had at a point said Asiwaju Tinubu does not give him intended attention anymore. He said he will never work for any interest of Asiwaju Bola Tinubu in his life time again. The question now is: why is he now seeking attention? To think of it, has Asiwaju come out to even tell him nor anybody that he is contesting for Presidency in 2023? Why is Gani crying more than the bereaved?

Gani Adams is the only problem we have in Yorubaland, a double face and traitor who can trade his kids for money.

We understand his plight. He is being ignored politically in Southwest and doesn’t find it comfortable that none of South West state is paying him political attention any longer.

However, people should ask him why he directed OPC leaders and members to cast their votes for Atiku Abubakar in 2019 Presidential election if his intention is to see Nigeria restructured. Adams is a chameleon, a visionless and directionless, abjectly confused man.

Of what importance does he think he is in Yorubaland? A nobody of course!

The relevance of his bravery and importance to our security should be measured with his level of involvement in the quest to form Amotekun. He was sidelined during the implementation of the Amotekun Security Outfits, just because of his garrulous behavior.

How many people has he empowered? None. Even with the billions of naira he raked in during Goodluck Jonathan’s administration. We understand the money is either finished or depleted, and that’s why he’s out to dent the image of Asiwaju Bola Tinubu. He’s a failure!

Asiwaju Bola Tinubu, in his capacity, has made millions of people, his records are unbeatable.

People’ should ask questions: why did Adams go to the Villa in his desperation to meet with President Mohammadu Buhari? Is Buhari no longer a Fulani man?

Gani Adams, as we all know has lost fame and recognition in Yorubaland but he’s looking for an avenue for his voice to be heard again. His name has always been associated with controversial issues.

Recently, he was equating himself with His Imperial Majesty Oba Ogunwusi Adeyeye Enitan, The Ooni of Ife and other Yoruba Obas until he was placed where he belongs.

The story of how he betrayed Dr. Fredrick Faseun by hijacking and factionalizing Oodua People’s Congress, is still very fresh in memories. He changed the mission of the group from its original aims and objectives and forced himself to lead, though rudderlessly.

We advise Gani Adams to go back to the Oodua People’s Congress and reconcile with those who have broken away from the group as a result of his selfish interests and his reckless leadership style, rather than chasing shadow. Many of these cadres have been Killed or maimed by him.

After settling his boiling home, he can now begin another reconciliation with some Yoruba elders. Yorubaland is not for sale.

On this note, we warn Gani Adams to stop his campaign of calumny against Asiwaju Bola Tinubu as we will not fold our arms, while a Yoruba misfits continues to drag the image of our Leader in the mud. We will not condone it because Yorubaland is not for hypocrite. We have all facts and evidence at our disposal to expose and disgrace Adams.