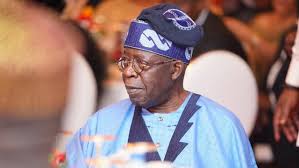 God owns my life, it can be taken only by Him- Tinubu

The ruling All Progressive Congress APC national leader, Asiwaju Bola Tinubu, has spoken publicly since his return from UK.

The top politician thanked God for sparing his life during a special prayer organized by friends to welcome him back from a three-month medical vacation in London, the United Kingdom.

He had returned to the country on Friday after undergoing a “knee surgery” in the British capital.

Governor Babajide Sanwo-Olu hosted the APC leader and his political associates and well wishers at the Lagos State House in Marina, Lagos Island, for the thanksgiving.

It should be noted that Political associates organize special prayer for former Lagos State Governor, Asiwaju Bola Tinubu, after returning from a three-month medical vacation in London.
Tinubu, during the event, acknowledged God as the giver and taker of life.

”I am a little emotional now but I am happy. God is the giver of life and the only one who can take life.

”And He (God) says, if I grant you power and the privilege in this life; I am the only one who can take it from you if you don’t use it in the way and manner that promotes humanity.

”It is the same God that has spared us till today and has given us the privilege, that I give glory to because I am standing before you hale, hearty and well.

”Today is a day of joy for me, having fixed today for this great event. We are here giving praises to God. May God bless all of you in attendance. I am grateful. I cannot say more than that today. Thank you all,” he said.

Among those that attended the event were the Speaker of the House of Representatives, Femi Gbajabiamila, members of the State Executive Council, members of the Lagos State House of Assembly and Local governments, and the Governor Advisory Council (GAC), among

Previous: Bakare to Buhari: History will recall that you failed if you don’t restructure Nigeria
Next: Why South East won’t get presidency in 2023- Clergyman