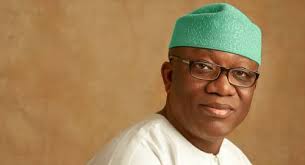 Ekiti State Governor. Kayode Fayemi on Wednesday declared his intention to contest for president in 2023.

With this development, he is joining Bola Tinubu, Rotimi Amaechi, Vice President Yemi Osinbajo and others to contest under the platform  of the ruling All Progressives Congress (APC).

Making the declaration iin Abuja, he said he would revive hope and build a world of fate for the common and the greater good of the country.

He also used the occasion to unveil his manifestation with the promise that he would reinvigorate the rural areas, build the economy and also offer hope to Nigerians.

The Governor added that his government would be leading a holistic and multifaceted approach to tackling the insecurity confronting the nation.

He noted that he decided to throw his hat in the ring after a thorough self-introspection and wide consultation.

He stressed that his candidature offers hope for the nation which is premised on a shared vision.

Fayemi lauded  the bravery of other presidential aspirants who have joined the race and who are still going to join the race, adding, “I will in the course of this campiagn adhere to the highest standard of decorum and decency which Nigerians expect from their leaders.”

Previous: I helped Tambuwal, Saraki to reach the top, it’s their turn to help me- Wike
Next: 2023: Vote for personalities, not political parties- Group warns voters