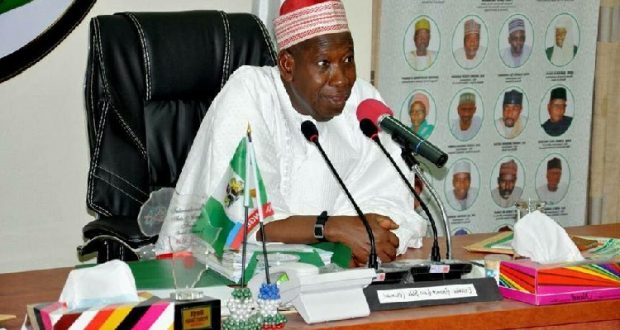 He said that out of the total budget, N151.9 billion was for capital projects, while over N89.9 billion would be used for the recurrent expenditures.

The Governor said that the 2018 budget had increased of over N17 billion over that of 2017, adding that the increase is to ensure that every citizen enjoy the dividend of democracy.

He disclosed that the Ministry of Works and Housing would received the highest amount of N40 billion if the budget is finally approved. Ganduje added that N21 billion was set aside in the budget proposal for the execution of various projects under the Ministry of Education in order to boost the sector.

“We have also earmarked N36 billion for the water sector that we planned to use for the provision of potable drinking water and industrial use.” He added that N9 billion was also earmarked for the health sector due to the importance of the sector.

“In an effort to boost the economy of the state, N965 million was earmarked for the Ministry of Commerce, while N10.4 billion was set aside for the agricultural sector. “We have also proposed N1.9 billion for the Judiciary and N5.6 billion for Transportation sector, while Information, Youth and Culture would get N1.4 billion,” he said.

Ganduje disclosed that if the budget was approved, all the 5km-roads across the 44 Local Government Areas of the state would be completed, so as to reduce the high rate of accidents.