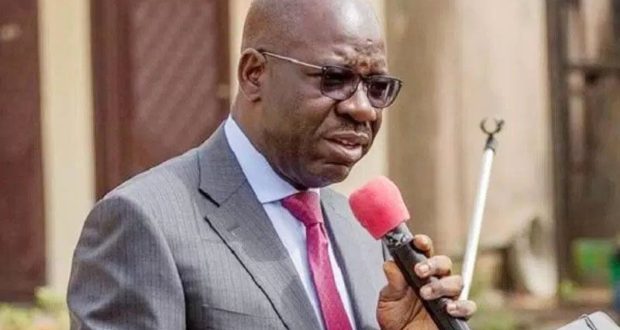 Edo chapter of the All Progressives Congress (APC) has raised alarm that Godwin Obaseki is massively looting the state treasury.

It said the government was chasing shadows, while neglecting important governance issues, especially the management of flood and protection of lives and property.

The campaign council on Thursday in Benin through its Chairman, Prince John Mayaki, queried the readiness of Obaseki’s administration to heed the warning of the National Emergency Management Agency (NEMA), by putting in place proactive measures to avert disaster and destruction of belongings in flood-risk areas of the state.

The Nigerian Meteorological Agency (NIMET) and Nigeria Hydrological Services Agency (NIHSA) had marked Edo as one of the highly probable flood-risk states in the country.

The campaign council said: “The warnings by NEMA, based on the predictions of NIMET and NIHSA, that Edo is among the highly probable flood-risk states in the coming months, should send alarm bells ringing on Osadebey Avenue (Government House, Benin), as a matter of priority for the government.

“Already, in these areas and beyond, the sprinkles of rain we have seen in the past few weeks have caused great devastation, in some cases leading to the avoidable loss of lives.”