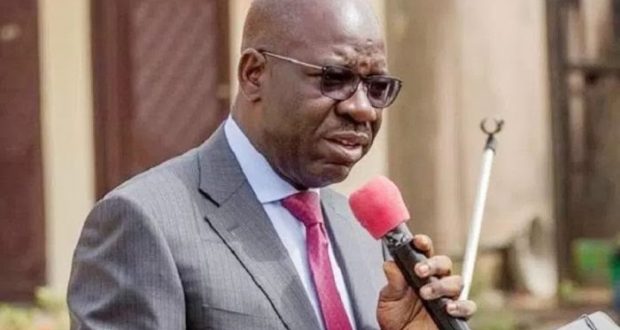 Edo Governor Godwin Obaseki has said he would not relent towards ending the activities of godfathers threatening to deprive the people of their democratic rights.

He said he promised himself and the people to fight against godfatherism started by his predecessor, Adams Oshiomhole.

He lamented that it was unfortunate that Oshiomhole was reneging on the mandate, The Nation reports.

Speaking while hosting ward leaders of the All Progressives Congress in the Oredo Local Government Area of Edo State, he asked them to join him to fight godfathers in the state.

According to him: “Comrade Oshiomhole came to me, asking that we join forces to fight and bring an end to the practice of godfatherism in the state.

“The partnership helped us in changing the narrative of development in the state.

“This led me into politics. I am into politics to better the lives of Edo people. We believed Oshiomhole and followed him to fight godfatherism.

The governor noted that he would always stand with the people irrespective of the circumstance.

He argued: “Any politics that doesn’t benefit the majority of the people is bad politics. The resources we have in the state is to be used for the benefits of the people of Edo State, not a few politicians.”

Obaseki assured the APC members and supporters in the Oredo Local Government Area that there was no cause for concern over the political crisis in the state.

“I am not bothered because no man is God. When they say I am a mosquito, I was never worried; I told them that mosquitoes can bite and it can cause malaria and if not well-treated, it can kill someone. Those bitten are already on life support but we pray they don’t die.”

The Chairman, Edo State Chapter of the APC, Anslem Ojezua, called on the ward leaders in the Oredo LGA to support the governor who is their son.