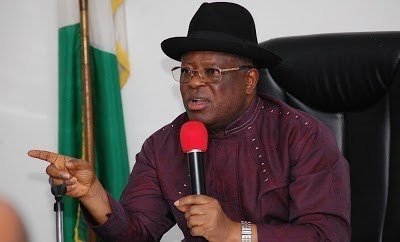 ‍Gov. David Umahi of Ebonyi has vowed to demystify politics and appointments in the state during his second tenure in office.

This, he said, was to check the desperation of individuals to occupy government positions.

Umahi said this on Thursday in Abakaliki while reacting to the recent killings of four people who included members of the peace committee set up in the wake of the boundary clashes between the Mgbo community of the state and the Agila of Benue.

Umahi said that he could not understand the recent trends in the state as every matter had “dove tailed’ into politics and appointments.

‘`Whenever there is nothing else to do, people are always struggling for appointments, and in Ohaukwu’s case they are already ahead of 2023.

“That is the cause of incessant killings in the area as nobody wants to do any other thing except cheap money from the government.

“This is why we are struggling to have control of Ohaukwu because it is people from the area who tell the Agila people that our people are coming there,” he said.

The governor admonished the people that anybody involved in the killing of another directly or indirectly, would have his or her generation doomed.

“Such a person will never succeed in life and when he or she appears too strong, God will use cancer, kidney and liver ailments to afflict the person.

“I therefore, direct the state Commissioner of Police to immediately arrest the 40 stakeholders of the council who signed the peace accord and ensure they are interrogated.

“They should report to the police and the Directorate of Security Services (DSS) and even when bailed, they should be interrogated daily until they produce the killers of the four committee members,” he said.

Umahi noted that the situation was an indictment on the council’s chairman, stressing that until God directed him on what to do, the chairman should join those that would be interrogated by the security agencies.

Dr Kelechi Igwe, Deputy Governor, noted that he was saddened that in spite of all government efforts which he spearheaded to bring lasting peace to the area, the alterations had continued.

“It is unfortunate that the council is in the spotlight again because I dissolved all committees existing in Ohaukwu and handed over the security of the LGA to the Commissioner for Border, Peace and Conflict Resolution.

“They should put their house in order to stop these killings and I suspect foul play because some members of the peace committee are among those killed,” he said.

Dr Kenneth Ugbala, Commissioner for Border, Peace and Conflict Resolution, noted that the stakeholders from Ohaukwu should explain the circumstance behind the killings