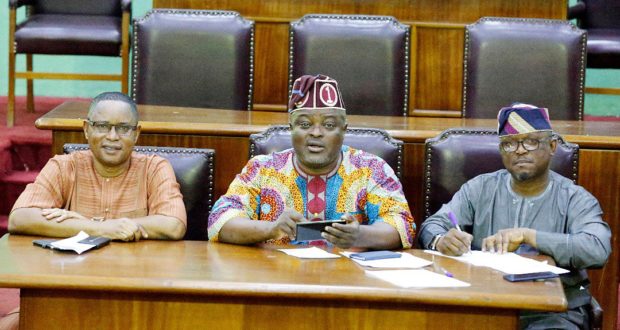 Members of Lagos State House of Assembly have adopted Babajide Sanwo-Olu to be chosen as the Candidate of All Progressives Congress, APC in the party’s Governorship Primary election now to take place on Monday.

Governor Akinwunmi Ambode, who is seeking a second term in Office, has been at loggerheads with party stakeholders in the state.

Adefunmilayo Tejuosho, the Chairman, House Committee on Information, Strategy, Publicity and Security, said in a statement that the lawmakers had resolved to support the governorship ambition of Sanwo-Olu.

Tejuosho said that the decision was taken at a Parliamentary meeting at Lateef Jakande Auditorium in the House of Assembly Complex on Saturday under the Chairmanship of the Speaker, Mudashiru Obasa.

Tejuoso said out of the 40 members of the House, 36 were present at the meeting and endorsed the decision, adding that the statement was duly signed by all the lawmakers.

Tejuosho said that the lawmakers were in agreement with the leadership of the party and the Governor’s Advisory Council which earlier endorsed Sanwo-olu for the governorship ticket.

Ambode’s second term ambition has been facing opposition within his party following speculations that he had fallen out of favour with his political godfather, Bola Tinubu.

Tinubu is allegedly supporting Sanwo-Olu, a former Commissioner in the state, who has already declared his intention to contest the governorship election on the platform of APC.

Analysts view the development as a trying political season for Ambode, who has since announced his readiness for the party’s Direct Primary to slug it out with his opponents.

Another APC Governorship Aspirant in the state, Femi Hamzat, a former Commissioner for Works, has reportedly stepped down his ambition to support Sanwo-Olu.

Local Government Chairmen and former Council Sole Administrators in the state are among groups rooting for Sanwo-Olu to succeed Ambode in 2019.