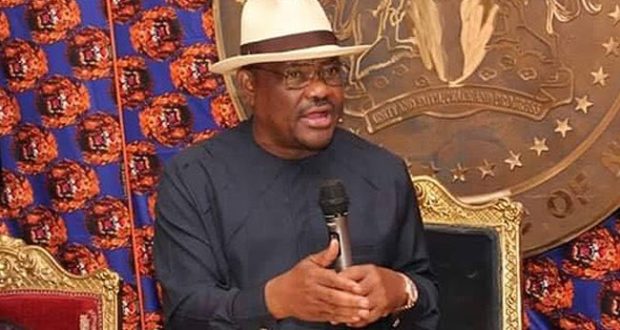 Group to Wike: Watch your utterances, you did not inherit Rivers from your father

A group known as the Rivers Leadership Advancement Foundation (RIVLEAF) has called on Rivers Governor Nyesom Wike to urgently watch his utterances and stop acting as if he inherited Rivers from his father.

The group, made this known in statement by its spokesman, Onyeche Nnatah Peters,

He lampooned the governor for what it described as “acts unbecoming of a public office holder, who should shape the hopes and aspirations of Rivers people”.

RIVLEAF condemned a broadcast by Wike on Friday, accusing him of throwing caution to the wind and made statements undeserving of the office he occupies.

It urged the governor to devise new ways of speaking on matters of state and national importance, while insisting that the utterances of the governor were doing incalculable damage to the people and image of the state.

Its statement reads: “RIVLEAF believes Governor Wike should show a reasonable sense of responsibility when addressing the state as there are better ways of passing messages across without sounding boastful and vengeful.

“Time and time again, Governor Wike speaks as if he has conquered the state, as if he is the owner, creator, and benefactor of the state; he speaks as though he inherited the state from his father.

“Rivers people are not conquered and will never be conquered by a civilian dictator. Rivers people contributed sweat, grit and industry to bring the state to where it is and one man will not destroy it in eight years.

“There are much more decent ways of making statements without sounding combative and desperate. Nobody is flexing muscles with him and he should know that. The situation in the country calls for measured responses and decency.

“It is during occasions like this that you know those who are statesmen, those who will not play politics with delicate situations and who weigh their words rather complicating things.

“RIVLEAF charges the governor to stop threatening those living and doing business in the state but seek ways of mutual respect in bringing about greater development.

“It looks as though Governor Wike is targeting the oil and gas industry with the latest arrest of workers of ExxonMobil. This is unnecessary and capable of having an international backlash on Nigeria.

“The governor himself during his state broadcast exempted oil workers from the lockdown, one would have expected the governor to meet with the oil majors and fashion out mutual ways of ensuring compliance with the state’s directive.

“While the governor reserves the right to protect the state, he should do so in cooperation with various agencies of the federal government and corporate bodies, rather than threatening them all the time.”