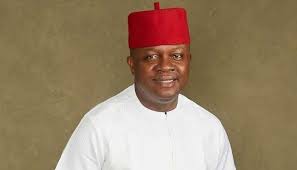 Gubernatorial Election: PDP is on mission to rescue Anambra- Ozigbo

The main opposition, the Peoples Democratic Party (PDP) in the forthcoming governorship election in Anambra State, Mr. Valentine Ozigbo, has said Anambra people wake up now to rescue their state.

He addressed party supporters in Anambra State, during a reception by members of his party to welcome him to the state, after his recent victory at the Court of Appeals in Abuja. The ruling led to his name being published as the candidate of the party by the Independent National Electoral Commission (INEC), said the state has collapsed.

He said: “Entering Anambra, I had first-hand experience of the decay in the state with the terrible condition of the road in Amansea. That road is an example of the dearth of infrastructure in Anambra.

“There’s nothing to be proud of in Anambra. Roads are bad, healthcare is non-existent, education is moribund, security is at an all-time low, add this to the state’s debt profile, and you will agree that Anambra needs a total overhaul.

“If we don’t start now, we might never get it right. Our freedom must begin now. November 6 is our date with history, and we are ready to march to victory. I call on Anambra people to rise up and rescue their state” Ozigbo added.

He thanked the people for the rousing welcome  stating that he is now convinced that the entire party structure and all the prominent politicians in the state from the party are now united behind him.

“I want to thank all of you for finding the time to come to welcome me. Yesterday, we recorded several victories. First, the National Assembly Caucus of the PDP came together to pledge unanimous support for this project (his aspiration).

“My sister and brothers Senator Uche Ekwunife, Hon Chuchu Onyema, Hon Chris Azubogu, Hon Obinna Chidoka, Hon Chinedu Onwuaso, met in the presence of Governors Aminu Tambuwal and Udom Emmanuel for this purpose. I am grateful to all of them.

“Second, the entirety of the PDP Governors announced that they are solidly supporting this cause and would provide all the necessary resources to ensure that we win this election.

“Also, INEC has published our name as the PDP candidate for the election after a period of uncertainty.

“Despite their (opposing faction) loss at the Appeal Court, our detractors attempted to obtain an order for a stay of execution on the judgement. Unfortunately for them, the court threw out their prayer and affirmed Valentine Ozigbo and Owelle Azuka Enemo as the PDP flag-bearers.

“Finally, at the party’s National Secretariat in Wadata House, the entirety of the PDP leadership, National Executive Committee, National Working Committee, and Governors from all the zones gathered to inaugurate a powerful 179-member National Campaign Council to execute the election.

“Governor Okezie Ikpeazu of Abia State is the Chairman of the Council, Governor Ifeanyi Okowa of Delta State is his Deputy. At the same time, our brother, Osita Chidoka, will be the Secretary of the Council.

“All the PDP Governors are members of the Council. This is our election to win, and by God’s grace, we will march to Agu Awka (government house). It is time for us to show Ndi Anambra the way to go,” Ozigbo said.