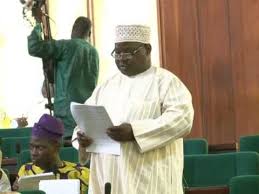 The House of Representatives has been thrown into mourning again as a member representing Gwaram Federal Constituency of Jigawa State, Hassan Kila is dead.

The unfortunate incident was announced by a member of the House, Magaji Da’u Aliyu announced on his Facebook page on Thursday.

Kila reportedly died after a brief illness at a hospital in Abuja.

The lawmaker spent a large part of his career as a controller of customs with the Nigerian Customs Service, Abuja and In 2015 he was elected under the platform of the All Progressive Congress (APC) to represent Gwaram Federal Constituency.

Only recently, Ossy Prestige passed on at a hospital in Germany after battling an undisclosed illness.

It would be recalled that the Spokesperson of the House, Ben Kalu recently blamed the rate of mortality among members of the National Assembly on demands from constituents

Previous: NANS warns Yoruba elders to stop politicising security challenges
Next: How Ogun Deputy Speaker was booted out of office