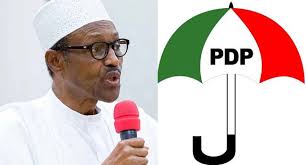 How APC is planning tenure elongation for Buhari- PDP

The major opposition, the Peoples Democratic Party, PDP, has alleged that the All Progressives Congress, APC, is plotting to elongate President Muhammadu Buhari’s tenure.

The accusation was made by PDP’s National Publicity Secretary, Debo Ologunagba in a statement.

According to him, Buhari’s delay in signing the Electoral Act Amendment Bill was a plot by the APC to elongate Buhari’s tenure.

In a statement, Ologunagba warned of the dangers of not signing the bill into law.

According to Ologunagba, Buhari and the APC administration are “heightening apprehension across the country and orchestrating a constitutional impasse that can railroad our democracy into an emergency tenure elongation.

“Widespread restiveness with consequential violence, bloodletting and attendant humanitarian crisis in the country that may affect the entire West Africa subregion, Europe, America and other parts of the world if not addressed.”

It will be recalled that he Presidency on Tuesday.had said Buhari would sign the Electoral Act Amendment Bill within hours.

On Wednesday, it was learnt that the President has postponed the signing to Friday.

It will be recalled that the National Assembly had on January 31, 2022, transmitted the bill to the executive for signing.o